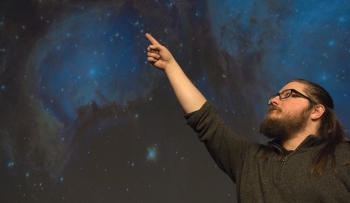 Josh Carroll '17 majored in physics at Radford Unversity. He's now featured in a YouTube spotlight video about his journey.

Radford University alumnus Josh Carroll ’17 is featured in a YouTube spotlight video that highlights his journey from veteran to .

In the 4-minute-long video titled “Reaching for the stars,” Carroll shares his love of space and how he worked his way through school and rigorous science courses with help from YouTube videos.

Carroll, who majored in physics and minored in math and astronomy, was the first Radford University student to create an original planetarium show. He graduated in 2017 at the top of his class.

He returned to campus earlier this year with YouTube staff and producers to film the video. Radford University Department of Physics Professor Rhett Herman, who worked closely with Carroll while he was a student, is featured in several interviews.

Scenes were also shot in Carroll’s hometown of Blacksburg and at New River Community College, where he attended before transferring to Radford.

Carroll is currently working as a scientist and electronics/systems engineer for Booz-Allen-Hamilton in McLean, Virginia.

“I’m continually pushing the boundary of getting people to know more and more about the universe,” he said in the video. “I can’t see a stopping point for me ever doing that.”