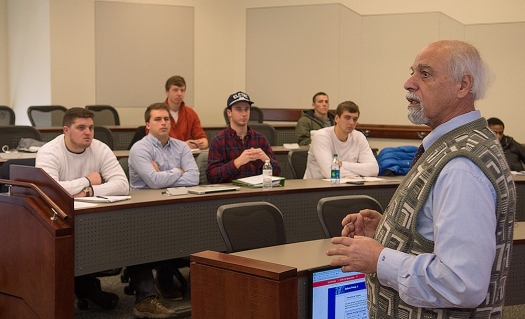 It has long been asserted that China’s undervaluation of its yuan is the main cause of a rising U.S. trade deficit.

However, Radford University Economics Professor Nozar Hashemzadeh wrote in his latest published research that it is the United States’ “strong dollar policy” that has created major obstacles in reducing the country’s trade deficit with China and the rest of the world.

The “King Dollar” policy, Hashemzadeh explains, has contributed to the loss of U.S. exports and thus the loss of many U.S. jobs.

Hashemzadeh’s paper, “The Empirical Correlation between U.S.-China Trade Balance and Changes in the Yuan-Dollar Exchange Rate: A Survey of the Evidence,” is featured in the Journal of Global Economics, Management and Business Research, volume 10, issue 2. His analysis comes from more than three years of research which explores data back to 1985.

“Theoretically, if the U.S. allowed the exchange rate between the U.S. dollar and yuan to adjust to its competitive level, the U.S. trade deficit with China and the rest of the world would narrow considerably, resulting in much greater U.S. exports and restoration of millions of U.S. jobs,” Hashemzadeh wrote.

The professor explains that the “strong dollar” policy has led to the dollar being overvalued and thus contributed to higher account deficits and lower domestic savings since the 1990s.

Increasing savings is one of three methods Hashemzadeh prescribes for reducing the trade deficit. The other two involve “reducing government expenditures on nonsensical projects and making the dollar internationally competitive. If we can do that, our economy will prosper,” the professor said.

The United States must not keep the value of the dollar high, Hashemzadeh argues. “It should not make it the king of all currencies and expect other nations to convert their cheap money to expensive dollars to buy American-made goods. Nations are not going to do it. They’re going to buy cheaper Chinese goods.”

In his research, Hashemzadeh tackles the topic of China’s own valuation of it’s yuan in relationship to the U.S. dollar. The yuan currently stands at 14 cents to the dollar.

Based on his data analysis, Hashemzadeh states that “net exports from China begins to diminish when the value of the yuan drops to 7 cents or less.”

While the findings “demonstrate a strong correlation between U.S. imports and the value of the yuan, there are many unaccounted for factors such as significantly lower labor costs, environmental and manufacturing regulations and easier access to the global market that have invigorated many U.S. manufacturers to outsource their production to China.”

Economic theory and commercial history provide irrefutable evidence, Hashemzadeh said, that obstructing free trade will lead to economic stagnation, a lower standard of living for a country’s citizens and a heightened sense of international conflict.

Hashemzadeh, in his paper, offers a solution.

“A preferred policy for rebalancing the chronic U.S. foreign trade imbalance is to abandon the strong dollar policy in favor of a market-driven exchange rate,” he wrote. “A lower exchange value for the dollar will, in time, stimulate exports, attract foreign investment, create jobs and reduce consumerism.”

Last, but not least, Hashemzadeh said, his research does not support the “thesis” that China is a currency manipulator.