Class of 1968 celebrates their Golden Reunion 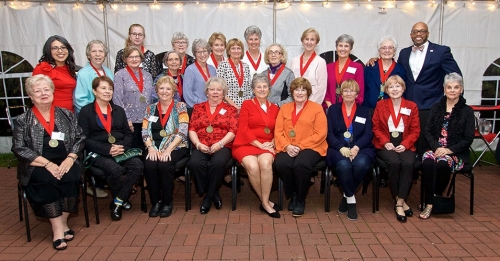 The Class of 1968 returned to Radford University during Homecoming Reunion and Family Weekend to celebrate their 50th anniversary, or Golden Reunion.

President Brian O. Hemphill, Ph.D. and Radford University First Lady Marisela Rosas Hemphill, Ph.D. welcomed the alumnae to the historic Governor Tyler House on Oct. 20 for the Golden Reunion Dinner. Over 60 guests attended, including those who had previously celebrated their golden anniversary.

“Thinking of the 80 thousand-plus alumni that have graced this campus, a lot of today’s success began with the people in this room and your legacy,” President Hemphill said to the guests prior to the evening’s dinner service. “I am very proud of the students we have on our campus today. There are some great things happening on your campus. I’m excited about the momentum we have and I believe you will all be a big part of it.”

“I haven’t been back since I graduated. Oh my gosh has it grown,” said Terry Doty ’68. “We needed to have someone show us around campus. We were trying to find where the old swimming pool was located.”

Not everyone in attendance was seeing the campus again for the first time. Some, like Beth James ’68, frequently attend campus events.

“Friendships and a love of the campus are what bring me back.

“A group of us come back fairly often for reunions, functions and tours,” explained James. “We love Radford University.”

A member of James’ aforementioned group, Felicia Braun ’68, was quick to remark that, “The school made us who we are today.”

“What a wonderful spirit … a Highlander spirit we have here at Radford University,” said Shirley Walton ’60 to the group prior to the meal. “I think about all of the lives Radford has touched. It would be impossible to encapsulate it all in one book.”

Music made popular in the late 1960s played as guests dined and shared memories about their alma mater. As dinner concluded and dessert was being enjoyed, Laura Turk ’87, M.S. ’90, executive director of Alumni Relations, spoke of events that occurred – both on campus and around the world – in 1968.

“Your legacy is an important part of Radford’s history,” said Turk after the medal ceremony.

After the induction ceremony, in what has become a tradition at the Golden Reunion Dinner, a group of women then led the guests in the joyous singing of a colorfully titled song with equally as colorful lyrics from their days at Radford.