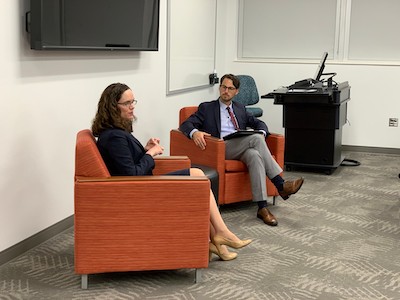 For the fall 2018 Prelaw Society event, Allison Kidd-Miller, assistant director of the U.S. Department of Justice (DOJ), Civil Division, National Courts Section, visited with prospective law students at Radford University on Oct. 23 in the College of Humanities and Behavioral Sciences.

Kidd-Miller, who took personal time to make the trip from Washington, D.C. to spend time with students, focused the conversation on her career, motivations as a lawyer and contract law.

“I’m honored to be here today,” Kidd-Miller said. “And then I looked at who your previous speakers had been at these events and I was just floored. Thank you so much. I’m glad to be here.”

During Kidd-Miller’s current role in the DOJ, she was also a senior trial counsel in the Civil Division, National Courts Section (2010-2014) and a trial attorney in the Civil Division, National Courts Section (2005-2010). In her current role, Kidd-Miller is responsible for reviewing attorney work product in a variety of trial and appellate matters before the Court of Federal Claims and the Court of Appeals for the Federal Circuit, including bid protests, spent nuclear fuel cases, and personnel and veterans’ benefits appeals.

The event followed an actor’s studio format made popular by a Saturday Night Live sketch. Assistant Professor of Criminal Justice Luke William Hunt hosted the event. Kidd-Miller and Hunt met in 2004, when they both served as law clerks for U.S. District Judge James. P. Jones.

“When people are negotiating a contract, they need to know what the rules are,” she said. “They’re going to brainstorm all the things that could go wrong, all the risks, and trying to spell out in the contract who is going to bear the responsibility [for the risks]. That’s important because you need to know what you are getting into and what to expect if things go wrong.”

There are legal theories that relate to this that could get someone out of a contract that had not been entered into properly, Kidd-Miller continued.

The example that was used was if Hunt had entered into a contract for 20 (ink) pens and then Kidd-Miller drove a tractor-trailer up with 20 (animal) pens.

That’s why it is important to have a meeting of the minds, Kidd-Miller said.

Following Hunt’s conversation with Kidd-Miller, students had the opportunity to ask questions, which covered the topics of other careers Kidd-Miller had considered, why she chose the DOJ, how she prepared for her career during her degree programs and what she enjoys about the DOJ work environment.

“If you have your heart set on something, don’t let one person make you give up,” Kidd-Miller said. “You have to put yourself out there and take risks knowing you’re going to fail sometimes. That’s OK. You’re going to learn something from it.”

Kidd-Miller’s parents, who live in Roanoke, attended the event.