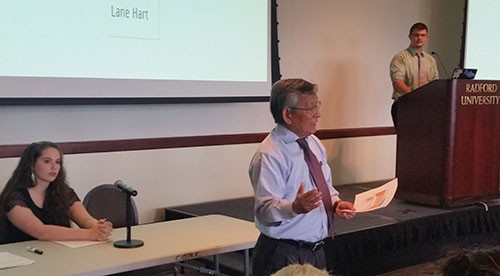 Radford University’s Department of Economics held its annual World Food Day panel discussion Oct. 16, with two student presenters focusing on the possibility of a zero hunger world by the year 2030.

Lane Hart, a sophomore management major, focused his presentation on food security issues in the United States, while Sarah Jennings, a sophomore graphic design major, concentrated on those same issues in Virginia before an audience of students and faculty in Kyle Hall.

The event, moderated by Economics Associate Professor Kiert Toh, coincided with numerous other World Food Day 2018 events throughout the United States and in various countries. The day is organized annually by the Food and Agriculture Organization (FAO) of the United Nations to increase awareness and action for individuals who suffer from food insecurity and hunger.

Events, like the one at Radford University, were organized in more than 130 countries.

Before the discussion began, Davis College of Business and Economics Dean Joy Bhadury spoke of the importance of the event, which has been an annual occurrence at the university for nearly three decades.

“This is one of the important problems facing human kind,” Bhadury said about food insecurity. “As the world has gotten richer over the last three decades, deep pockets of poverty remain.”

In his presentation, Hart spoke about the severity of food insecurity in the United States and particularly noted its impact on children. “In the United States, one in six children are affected by hunger, and one of the biggest hurdles for food insecure children is obtaining food outside of school,” he said.

“As a farmer, providing enough food for the population is our No. 1 concern,” said Hart, who grew up on a farm in Carroll County. He proposed initiatives for other individuals and groups to help, including donating food to programs that assist the hungry and volunteering to help with food distribution.

“Anything you can offer means a lot to people,” he said.

Addressing hunger in Virginia, Jennings said there is no reason the Commonwealth, “as rich as we are in resources,” should have people who are hungry.

“Yet, from Alexandria to Abingdon, there are Virginians who regularly worry about where their next meal is coming from,” said Jennings of Harrisonburg. However, there are many ways to help, she noted.

“We can help by not wasting food,” Jennings explained. “If you’re at a restaurant, ask for a half portion if you’re not feeling hungry, and be sure to take your leftovers home.”

Other ways to contribute is to know where your food comes from, she said, support your local food producers and “pick the ugly fruits and vegetables” in the grocery store.

“Don’t judge food by its appearance,” Jennings said. “Oddly shaped or bruised fruit are often thrown away because they don’t meet our cosmetic standards. Don’t worry, they taste the same.”

Supporting adequate federal funding for programs, such as SNAP and WIC, that help low-income communities is another way to help, Jennings explained.

She also suggested becoming an advocate.

“To make progress toward ending hunger in Virginia, we need to make sure our lawmakers in Washington are fighting for those struggling back home,” Jennings said. “Ending hunger in America is feasible. What we need is the political will to do so.”

“I want all of you to take a moment to think about how much food you throw away,” Jennings said. “I don’t think food production is a problem. I think if we change our mindset and stop wasting so much food, we could really strive to end hunger by 2030.”

World Food Day was established by the FAO in 1979 and was first observed in 1981. Economics Chair and Professor Prahlad Kasturi has been organizing the annual event at Radford University since 1991.