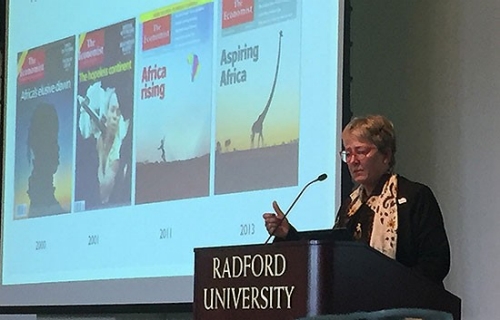 Speaking to a large gathering at Davis College’s Kyle Hall, Anderson spoke about her organization’s efforts to assist African countries toward self-reliance and made a pitch to students about rewarding careers in foreign service work.

Anderson serves as the deputy assistant administrator for the USAID Bureau in Africa, “the primary U.S. government agency in leading international development and humanitarian efforts to save lives, reduce poverty and strengthen democratic governments around the world,” she said.

Anderson shared ways USAID promotes trade on the continent and encourages investment by American business “to make sure African countries can become self-reliant.”

The organization’s influence, however, reaches far beyond trade and investments, she said.

“We also address the underlying issues that are critical to growing economies, so we also respond to disasters. USAID is the agency that brings together the skills and resources needed to respond to those disasters,” Anderson explained. “We also strengthen education and health systems. We enhance food security, empower women and bolster good democratic stubbornness.

These are all important to economic growth and important to getting our partner countries to the point of self-reliance,” she continued. “That exemplifies American generosity.”

“I’m looking at the students here and telling you that there are some great opportunities to work in public service,” she said, giving as examples such agencies as USAID, State Department, Department of Defense, Central Intelligence Agency, Department of Agriculture and Department of Commerce.

“There are many opportunities and they need your skills,” Anderson said. “We need people who know business, who know finance, who know economics.”

She has more than 30 years of development experience, mostly in Africa. Anderson began as a Peace Corps volunteer in Ghana.

Since joining USAID in 1988 as a foreign service officer, Anderson has worked in USAID missions in the Democratic Republic of Congo, Uganda, Sudan and East Africa. She served as the deputy director in the East Asia Office in USAID headquarters in Washington, D.C. Most recently, she served three tours in Africa as USAID director: East Africa 2006-2009; Ghana 2009-2013; and South and Southern Africa 2013-17.

Her foreign service positions have provided her a “fantastic career,” Anderson said. "I’ve really appreciated the opportunity to wake up every day and go to work and do something that’s making people’s lives better and at the same time helping America."