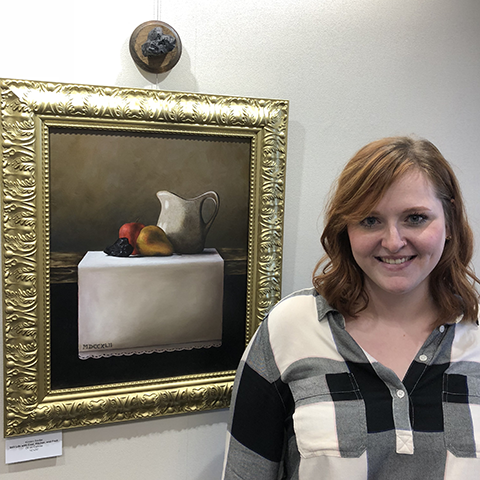 Kirsten Sadler, a second-year Master of Fine Arts student, along side a still life portrait and sculpture featuring coal, the focus of her exhibition at the Andrew W. Ross Student Art Gallery in McConnell Library.

“I am glad to see it all come together,” said Sadler. “Each piece strengthens and parallels the other.”

The 12-work exhibition features the Appalachian currency - coal.  Black gold, as it has been known, is featured directly in a range of media: drawings, paintings, canvas works and charcoal landscapes with printed acetate overlays that also allude to the central, sometimes paradoxical, role coal has played in the region Sadler proudly calls home.

“There are a lot of issues – social, economic, environmental – relating to coal, the coal industry and Appalachia,” said Sadler. “In a subtle, conservative way, I wanted those who view the works to explore them.  Each viewer can see what I saw, and, from those highlights, investigate it themselves.”

The show is a step toward completion of Sadler’s thesis that will be presented in the spring as she prepares to be hooded as a MFA graduate.  As part of the process of preparing the body of work, Sadler took classes in the Appalachian Studies program.

“The thing I appreciate is that Kirsten has taken an oil still life and incorporated a fossil fuel. It is unexpected. It presents an aesthetically pleasing way to look at coal, which, of course, continues to have a powerful impact on our region,” said Theresa Burriss, director of the Appalachian Studies program.

The granddaughter of a former coal miner, Sadler hopes to display the works across Appalachia and was pleased with the outcome of the process.

“It is about having an idea and then seeing it through. It is a labor of love. To see it on display is exciting and humbling,” Sadler said, whose works will be featured in the Ross Gallery through Nov. 25.