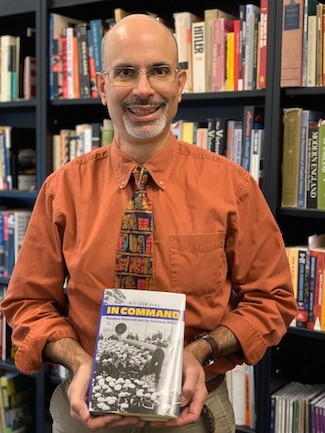 In Professor of History Matthew Oyos’ new book on Theodore Roosevelt, he covers the iconic president’s influence on the modernization of America.

Oyos’ book, titled “In Command: Theodore Roosevelt and the American Military,” was an idea that came about during Oyos’ time as a graduate student – but was just recently completed and published.

Because earlier American presidents do not have presidential libraries, Oyos traveled around the east coast of the United States to read and study Roosevelt’s writings. Most of Roosevelt’s official works are housed in the Library of Congress and the National Archives, but his private papers and letters are in Harvard Library.

Oyos said that Roosevelt is known as one of the intellectual presidents, having written 38 books in his lifetime, including a book on the definitive history of the War of 1812 that still stands today as the most comprehensive treatment of that side of the war.

A book on Roosevelt’s impact on the American military was something that hadn’t yet been compiled into one publication, Oyos said.

“Under him, the United States adopts a new technological style of battleship – the dreadnaught style – following the British model,” Oyos said. “But he also promotes the technologies that will bring the battleship down – submarines and aircraft. He is the first president to go down in a submarine and slipped away from his secret service detail to do it.”

After seeing a demonstration of the USS Plunger in the Long Island Sound while on a family vacation, Roosevelt whispered to the Plunger’s commander asking if he’d still be in the area the following day for a more hands-on demonstration.

Rainy weather allowed Roosevelt to disguise himself in heavy gear and meet the submarine unnoticed. He took a dive in the Plunger for around 50 minutes – and even took control of the vessel.

A major initiative of Roosevelt was to have younger and more physically fit officers in the American military.

“In the Spanish-American war, he sees a lot of over-age, overweight officers that can’t take the stress of war,” Oyos said. “He wanted to change that as president. He couldn’t get Congress to change the promotion system, so he promoted officers that he saw fit to promote to brigadier general. He’s jumping over hundreds of guys to do this.”

John J. Pershing, future commander of American forces in France during World War I, was one of these officers.

His physical fitness requirements also drew ire from the military branches. The Army had to travel 90 miles under forced march conditions in three days. The Navy was required to do 50 miles in three days.

To silence his critics, Roosevelt took the test himself – except he did it in one day.

“It was January 1909,” Oyos said. “He left Washington, D.C. with four people on horseback. They had to march, too. They went from Washington, D.C. to Warrenton, Virginia. It was nice on the way to Warrenton, but a blizzard rolled in on the way back. Sleet, hail – everything. They got back to the White House around 9 p.m. that night. Roosevelt said the march was as ‘easy as taking candy from a baby.’ Vintage Roosevelt.”

The book also covers Roosevelt’s controversies, including the Brownsville, Texas, incident in 1906. Roosevelt discharged, without honor, 167 soldiers of the African-American 25th Infantry Regiment, also called the Buffalo Soldiers, after white residents accused members of killing a white bartender and police officer one evening, even though the soldiers were located in their barracks that night. Evidence was planted against the soldiers to influence the U.S. Army Inspector General’s investigation.

“He dismissed them and it was a miscarriage of justice,” Oyos said. “It was a major political controversy and the lowest moment of his presidency. Roosevelt has a judgmental, stubborn side in addition to his intellectual one.”

The American government restored the soldiers’ records in the early 1970s.

“In Command: Theodore Roosevelt and the American Military” was published by the University of Nebraska Press’ Potomac Books imprint.