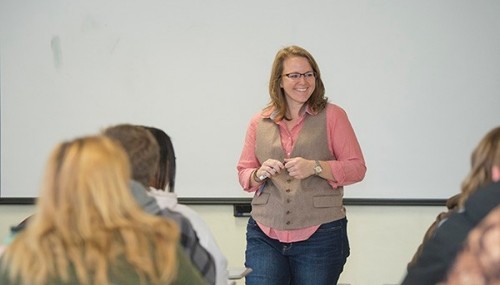 Coal mining, long a staple industry in Appalachia, inspired Aysha Bodenhamer ’10 when she was an undergraduate student at Radford University.

Now, Bodenhamer, an assistant professor of sociology, is examining the uptick of black lung disease cases in Appalachia through a sociological lens.

Theresa Burriss, who serves as chair of Appalachian Studies and director of the Appalachian Regional and Rural Center, was instrumental in Bodenhamer’s research topic as she took a group of students to see firsthand the effects of mountaintop removal in West Virginia during her undergraduate career.

Bodenhamer said that was the start of her research and of her graduate career, particularly “The issues with coal, non-renewable resources and energy and how we take that for granted as a society.”

Earlier in 2018, Bodenhamer was invited to participate in and attend a conference titled, “Working Environments and the Body: Historical and Comparative Perspectives on Coalfield Health, Disease and Disability,” to share her work on black lung in Shanghai that was co-hosted by the University of Shanghai and the University of Strathclyde, where she was one of two American scholars to attend the international conference.

Bodenhamer’s presentation focused on the barriers to prevention of black lung and the pitfalls of mining in Appalachia.

During Bodenhamer’s research, she noted that 20 percent of longer-tenured Appalachian coal miners are facing black lung, up from the three percent following the implementation of the Coal Mine Health and Safety Act in 1969.

In central Appalachia, the large, easy to reach coal seams have been mostly depleted, leading miners to dig through more rock to get to the coal. That rock contains silica, which exacerbates black lung by acting as glass in the lungs, Bodenhamer said.

“There’s been a lot of regulatory oversight in the region, in particular Appalachia appears to have an outlaw operator problem,” Bodenhamer said. “Regulators would turn a blind eye. There were charges of corruption within regulatory agencies.”

Bodenhamer said that some examples of that are the placement of coal dust monitors, which could be wrapped in rags or placed in the clean air intake of the mine. Bodenhamer also said there are allegations that companies use two different books to show what actual dust readings were and what regulators saw as the readings.

“Things like that the miners told me about,” she said. “There’s a lot of competition from the natural gas industry right now. There are charges saying coal is coming back, saying it needs to be deregulated. When you say deregulate, there are lives on the other side of that. That’s also driving the increase in black lung. It hasn’t been regulated and it’s been overlooked.”

Only retired miners spoke with Bodenhamer, who cited a culture of fear with the current miners as the reason they haven’t spoken up out the health concerns as there are so few mining jobs in the region.

“I’m very supportive of the coal miners because I understand where they are coming from and what they are facing,” Bodenhamer said. “In these regions, the political structure has favored coal for so long and created the mono-economy that it is in a state of crisis. What do you do if all your eggs are in one basket?”

As Bodenhamer gave her talk, she said that the audience was shocked because they hadn’t heard about these issues in the U.S. before. In regards to health and safety standards, Bodenhamer said, Chinese coal mining is worse than Appalachian coal mining due to a lack of health advances present in the United States.

Western coal mining regions in the U.S. are not facing the same health concerns, Bodenhamer said.

“This is only happening in Appalachia,” Bodenhamer said. “This isn’t happening in the number one coal producing state of Wyoming. They may have a little increase, but it is nothing like what is happening down here.”