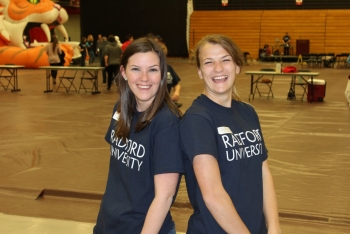 But Stanley’s first year as president was filled with much more than formal introductions and spectacular events. Stanley, a rising senior from Williamsburg, and her SGA team hit the ground running, advocating for positive change and programming that will benefit all Radford University students.

So successful, Stanley, who is majoring in mass communication with a concentration in public relations, was re-elected SGA president this spring and will return to that post this fall.

What do you feel is your greatest accomplishment this year as SGA president?

My greatest accomplishment would be co-chairing the *Unity Fest Committee. Jessi Wollmann, the former student representative to the Radford University Board of Visitors, and I expanded student representation on the committee. I think I am most proud of that and the work that went into planning Unity Fest itself. Next year, Unity Fest will have a budget line. That was made possible by the Student Finance Committee.

*The second annual Unity Fest was held in the Dedmon Center on April 7. The event is designed to unify the campus and surrounding communities. Representatives from several different student organizations brought together a diverse mix of activities for all ages to enjoy.

What would you say are some SGA highlights from the 2017-18 academic year?

What are you looking forward to next year within the SGA?

I am looking forward to continuing to gather student opinion and making a difference on campus. I am so excited to see what our members will accomplish next year. I am ready to build upon what we have accomplished this past year.