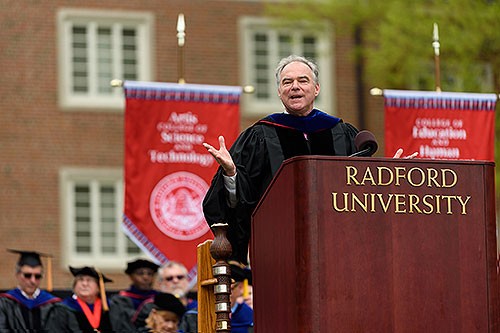 U. S. Senator Tim Kaine served as keynote speaker as Radford University conferred degrees on nearly 1,900 undergraduate and graduate students at its 2018 spring commencement ceremonies May 4-5.

Radford University conferred degrees on nearly 1,900 undergraduate and graduate students at its 2018 spring commencement ceremonies May 4-5, culminating with the undergraduate ceremony on Moffett Lawn.

U. S. Senator Tim Kaine served as keynote speaker. He told graduates, “It’s an honor to be here and share this special moment with you because Radford is a wonderful university that has trained generations of students to serve and succeed in Virginia and beyond. You are a distinguished group.”

Kaine acknowledge the many “battles and challenges” students faced throughout their time at the university.

“You’ve overcome all of that,” the senator said. “Your diploma isn’t just one among thousands. It’s a unique tribute to your own resilience, and for that, I salute you, and I salute all who have helped you achieve this wonderful day.”

Kaine said 2018 was a “time of great activism by young people” who are deciding to focus on the lives of others, and not just themselves.

Board of Visitors Rector Mark Lawrence told the graduates that the university community looks “forward to the many positive contributions you will make with your families, your communities, the Commonwealth of Virginia, the nation and the world. You will find this place, and your experience here, have prepared you very well. You’re going to do amazing things and make our world a better place.”

After conferring degrees, President Brian Hemphill spoke to the graduates, saying “whether your career takes you into the classroom, the newsroom, the hospital room or the boardroom, I hope that you take your Highlander values with you - values of service to others above all else and a commitment to justice for all members of our society.”

The president expressed gratitude “to all the parents, spouses, children, family and friends” for their loyalty support of the graduates. “We understand that these folks would not be sitting here in these seats if it were not for you.”

To the graduates, the president said, to great applause, “You are now graduates of one of the finest universities in the country. And without question, your degree from Radford University will take you far, as far as you want to go.” 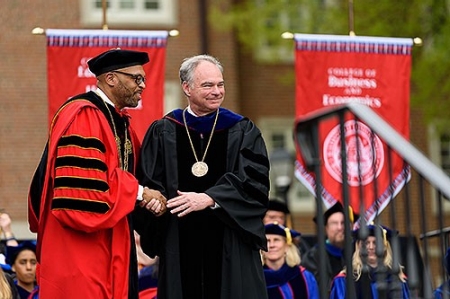 Before the ceremony began, a thrilled 8-year-old Rayna Mandes was jumping up and down, clinching her face. “I don’t know how much I can say it; I am so proud of her today,” she said.

Rayna was talking about her big sister, Nicole Mandes of Springfield, who graduated in three years – “I took a lot of summer courses,” she said – with majors in management and marketing.

“I just tried to stay focused,” Nicole said. “Finishing and doing well so I could be successful after college. I got involved a lot on campus, and that kept me motivated.”

She paused and laughed.

“Stop it; you’re making me red,” she said to her mother, Lisa Mandes, who was snapping one photo after another on her phone.

“I’m just so very proud of her,” Lisa Mandes said, fanning her face, fighting back tears. “She’s worked incredibly hard to work and graduate early and do everything she wanted to do, and then some.”

Kaitlyn Hughes said she has “bittersweet memories” when reflecting on her time earning a Master of Science in Special Education and Adapted Curriculum K-12 degree from Radford University.

“I have met sweet friends, grown in my teaching abilities and knowledge and have truly found myself, my passion and my purpose in life,” said Hughes of Bristol.

“The Radford University community has not only shown me how to be a great teacher, but has truly taught me the importance of kindness and acceptance of all.”

Hughes, a recipient of the Hattie M. Strong scholarship for student teachers at Radford, has taken a special education teaching position at a middle school in Washington County.

Music business major Jamee Jordan has “dreamed of this moment” for her entire life, she said. “The reality that it’s finally happening hasn't hit me yet. I’m graduating college, and I have the internship that I worked so hard toward.”

Jordan, of Green River, Wyoming, will intern at the IBLA Foundation, which organizes annual music competitions in Italy for pianists, singers, instrumentalists and composers.

“I feel like I'm living a dream,” Jordan said.

Media Studies major Annie Schroeder of McLean said she was excited to graduate and is eager to begin her career. “I've been learning about journalism for so long, it’s nice to be able to actually start doing it for myself,” she said.

Schroeder, a first-generation college student, is starting work in June as a TV reporter for NBC 29 in Charlottesville.

Working in student media helped her get there, she said. “As much as the school has helped me, I think it’s what I've learned outside of the classroom in student media that has got me where I am.”

Getting “real-life experiences in the classroom” has helped Matthew Akers, of Austinville, land a position as a sixth-grade math teacher at James Madison Middle School in Roanoke. “It has prepared me for my own classroom next school year.”

Building strong relationships with faculty has allowed him to learn from their expertise, said Akers, who also received the Hattie M. Strong scholarship. “Not only that, I have built friendships which will last a lifetime.”

The same goes for Alicia Harris, a marketing major from Dale City who is weighing two job offers in New York City.

“The teachers that I have met have been my biggest cheerleaders and strongest mentors,” Harris said. “Their constant encouragement, support and effort has led me to accomplish goals that I never saw coming.”

On Friday, more than 250 graduate students were hooded in a special ceremony inside the Dedmon Center. The Department of Information Technology graduated the first cohort of the Master of Science in Data and Information Management (DAIM) at the ceremony.

“I was always taught that university was a place you went to learn theory of how the world works,” said Steve Oaks, one of the first Master of Science DAIM graduates. “My attitude has changed as I have walked out with real-world skills.

“Not only did my professors provide me direct knowledge, they also provided me the ability to teach myself new skills as I need them,” Oaks continued. “Learning how to self-learn will be the most treasured skill I will leave Radford University possessing.”

Interim Provost Kenna Colley said that she “remains amazed at the drive, dedication, motivation, and inspiration of our students, especially those of you that have overcome obstacles and barriers along your educational journey and your life’s journey.”

The students earned the rank of second lieutenant and were granted authority by the United States Army to carry out their duties as newly-commissioned officers.

Col. Brian L. Pearl served as the keynote speaker. Pearl is a senior U.S. Army fellow at CSIS in Washington, D.C. He has commanded U.S. Army formations at every level from company through brigade, highlighted by his command of the 4th Brigade, 4th Infantry Division at Fort Carson, Colorado, and in Kandahar, Afghanistan.

At the ceremony, Pearl offered the officers advice as they navigate their military careers. Reach out to one another, know your trade and prepare, treat everyone with respect, embrace diversity and trust your gut, he encouraged them.

Stephen Bill of Manassas will heed Pearl’s advice as he begins active duty at Fort Gordon, Georgia, next month. At Radford, Bill received a Bachelor of Science in criminal justice and minor degrees in leadership and military science. Bill’s grandfather and father have both served in the military, and his sister currently serves as a captain in the U.S. Army.

Bill’s friends and family, including Steve and Nancy Bamford, watched as Bill was commissioned along with his 10 companions.

“We’ve known him since he was 10 years old,” said Steve Bamford, whose daughter Caroline, a rising RU senior, dates Bill. “Radford’s ROTC was a very good program for him. We are proud of him.”

The School of Nursing and Doctor of Physical Therapy program held pinning ceremonies for graduates Friday afternoon, and a Multicultural Congratulatory Ceremony was held that evening in the Bondurant Auditorium.

Each of the university’s colleges held receptions on either Friday or Saturday for students, faculty and alumni. The College of Humanities and Behavioral Sciences presented its Dean’s Scholars Awards to students at its event.

At the Artis College of Science and Technology (ACSAT) Awards Ceremony and Reception on Friday, several students and faculty were recognized for their outstanding achievements within the college.

Dhami, of Nepal, received his undergraduate degree from Tribhuvan University in Nepal. He was attracted to RU’s Master of Science in DAIM, which combines traditional classroom learning with practical experience, resulting in a curriculum that challenges students to solve real problems for real clients.

While pursuing his master’s, Dhami worked as a data analyst among the team of Radford University administrators, faculty and students who implemented IMPACT, the university’s new competency-based education program. He highlighted IMPACT and other innovative projects as his major achievements while at Radford.

“I had the opportunity to get real-time exposure while studying and learned new skills and technology,” Dhami said.

He said he feels prepared for the future, thanks to his Radford University experience and the many professors and mentors who helped him along the way.

“I feel awesome and now I am ready to tackle corporate problems in the big data world,” he said.

After commencement, Dhami will start his career as an associate engineer at WellCare Health Plans, Inc. in Florida.

Ross Robertson was also part of a milestone within Radford’s Artis College of Science and Technology. Robertson is the first student to graduate from Radford with a biophysics concentration, instituted by the physics department last year.

Ross, of Narrows, participated in the 2016 research trip to Alaska and presented the results at the December 2016 American Geophysical Union meeting in San Francisco. He was part of the inaugural class of Radford University Makerspace work study students and was the president of Radford’s Society of Physics Students (SPS).

Robertson said leaving Radford University will be bittersweet. He is proud of his many accomplishments, the conferences he attended and presented at and the invaluable experiences and friends he made through his participation in SPS.

“It hasn't really hit me that I'm leaving, and I don't think it is going to hit me until next semester when I start my classes for graduate school where I'm going to need all I've learned here at Radford,” Robertson said.

He has been accepted into Appalachian State University’s master’s program in engineering physics and will start there in August. He is aiming to take his degrees into the field of biomedical engineering.

The majority of this year’s graduates – 94 percent – were Virginia residents. Graduates came to Radford University from 113 Virginia localities, which accounted for 84 percent of the state. Remaining graduates came from 23 other states, including Maryland (21 graduates), New Jersey (7), North Carolina (7) and Pennsylvania (6). Six are from Washington, D.C.

The number of first-generation graduates totaled 653, 40 percent of the graduating class.