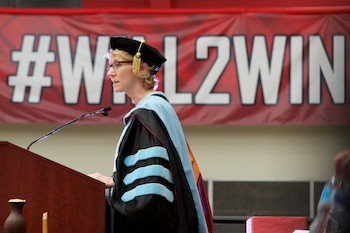 More than 250 Radford University graduate students were hooded in a special ceremony inside of the Dedmon Center on May 4 surrounded by their family, friends, professors and mentors.

The Department of Information Technology graduated the first cohort of the Master of Science in Data and Information Management (DAIM) at the hooding ceremony.

“I was always taught that university was a place you went to learn theory of how the world works,” said Steve Oake, one of the first Master of Science DAIM graduates. “My attitude has changed as I have walked out with real-world skills.

“Not only did my professors provide me direct knowledge, they also provided me the ability to teach myself new skills as I need them,” Oake continued. “Learning how to self-learn will be the most treasured skill I will leave Radford University possessing.” 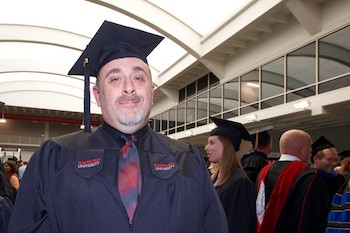 Interim Provost Kenna Colley said that she “remains amazed at the drive, dedication, motivation, and inspiration of our students, especially those of you that have overcome obstacles and barriers along your educational journey and your life’s journey.”

“As you go out into your respective professions and, by the virtue of your advanced degree and the responsibilities – and privileges – that you have earned, your co-workers and colleagues will have high expectations about your performance and preparedness. Rest assured you will live up to their expectations and beyond,” Colley said. “You are a Radford University graduate. You are a Highlander.

“Go forward and honor your degree, your institution, your family and friends and, most of all, honor who you are and the intellectual responsibilities you now possess,” Colley continued.

Kirsten Pratt, who graduated with a Master of Science in Counseling and Human Development with a concentration in Clinical Mental Health Counseling, said that Radford University's Counselor Education program afforded her “the best clinical and professional experience” and set her up well in her future career. 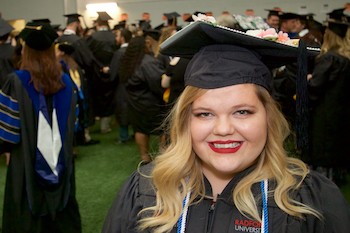 “I wanted to continue with Radford for my graduate degree because of my wonderful experience as an undergraduate,” Pratt said, of Elliston. “As a graduate student at Radford, I was blown away by the care I received from my professors in my program. Each professor truly cared about my success as a professional as well as a student.”

During the hooding ceremony, Laura Jacobsen, interim dean of the College of Graduate Studies and Research, thanked the families of the graduates to support the students.

“Your faculty, family, friends, and colleagues have been partners and witnesses to your journey,” Jacobsen said. “We can only imagine to where this journey continues, but oh, what a journey it will be.”

Bonnie Slaughter was in attendance to see her daughter, Kaitlynn Slaughter of Appomattox, receive her MFA and be hooded by Assistant Professor of Photography Andrew Ross.

“I’m so proud,” Bonnie Slaughter said. “It’s been a long time coming. I’m really proud of the family she’s been able to make along the way.” 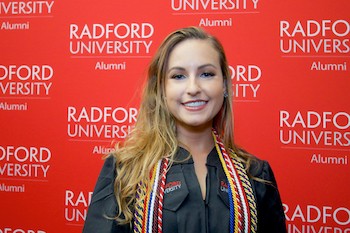 After being hooded by their mentor, each graduate shook hands with Radford University President Brian O. Hemphill as they left the stage.

Among her fondest memories of graduate school, Pratt said, was the opportunity to challenge herself as a person and participate in professional conferences.

“There isn't a class that you take that doesn't challenge who you are as a person, because as a counselor you have to be open minded and ready to hear your clients' stories,” Pratt said. “I blossomed because my program gave me the tools needed to be confident in my abilities as a professional. Radford gave me the room to grow and change.”

Stefani Szkalak of Northern Virginia, a first-generation American, said that she continued her education at Radford University because it “felt like home.”

“I spent four years here and I wanted to pursue my master’s,” the Strategic Communication graduate said. “Dr. John Brummette convinced me that this was the only program to which I needed to apply. I bought into that and I’m glad that I did.”

Szkalak said that her father is from Hungary and that he always wanted to get his master’s, but never did.

“That was his goal – when he had kids, he wanted one of them to go on and get their master’s,” Szkalak said. “I did that.”