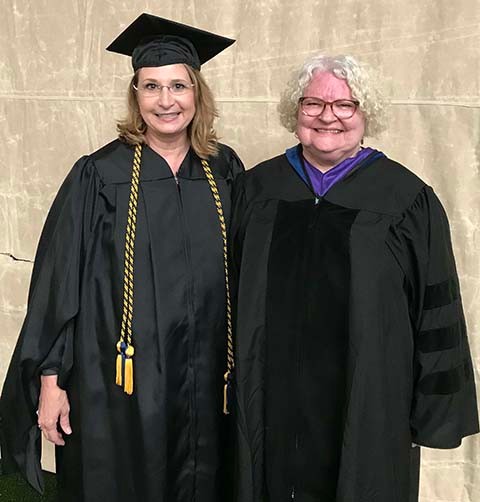 To finalize the Master of Social Work (MSW) degree that she earned in 2008, Kathy Douglas donned her graduate hood on May 5, 2018, at the Graduate Hooding Ceremony in the Dedmon Center.

Family, friends and colleagues from her MSW cohort traveled from North Carolina and across Virginia to watch Professor Emeritus of Social Work Alice King-Ingham bestow the graduate’s hood upon Douglas, who earned her BSW in 1983 at Radford as well.

The illness and impending death of her father-in-law in 2008 precipitated the decade-long delay in marking Douglas’ academic achievement.

“I just couldn’t leave him at that time in his life,” said Douglas, who is a grief counselor for Hospice and Palliative Care in Lincolnton, North Carolina. “Then, well, life happened . . . kids became teenagers, my husband’s work required travel and I was working.  As much I wanted to do this, to put a period at the end of the sentence, I just kind of let it go.”

Douglas’ husband, Paul, queried School of Social Work director Diane Hodge last winter after Kathy had reflected on the 10th anniversary of an itch that still called for scratching.

“This would not have happened without Paul who understood the value to me of the hooding and my Radford degrees,” said Kathy Douglas. “He reached out to Dr. Hodge who just told us ‘I’ll take care of it’ and to be here. So here I am, very excited and proud.”

Upon her return as a graduate student, Douglas found that Radford was still the Radford she recalled fondly from her undergraduate experience.

“I had the same experience at Radford as a graduate student as I did as an undergraduate. It felt like home. Radford is special . . . great access to professors who care and classes that are conducive to learning. There was always a feeling of being welcome in whatever class you took and that your opinion was valued.”

Douglas was thrilled to have her friend and mentor, King-Ingham, hood her.

“She was so encouraging. I was returning to college after 25 years,” said Douglas who began her hospice career in 2007 as intern with the Hospice of Southwest Virginia in Wytheville while working toward her degree. “And she reinforced the truth that to be a social worker you need a healthy sense of humor.”

Upon her return to pursue her MSW, Douglas spent Tuesday thru Thursday in Radford and commuted home to North Carolina. While in Radford for graduate school, Radford’s closeness and intimacy manifested itself again on her behalf. She rented a room from a Professor Emeritus Ed Jervey whom she had known as an undergraduate.

“When I contacted him about the room, I didn’t think he would remember me. But he immediately said, ‘I remember you.  You are the one who was always speaking up in class.’ It was another really lovely experience at Radford,” Douglas said.

Douglas said Radford's original appeal to her was its focus on rural health care and that it empowered her professionally.

“Radford really encouraged us to be advocates,” Douglas said.

The impact of a master’s degree on her professional development was refreshing for Douglas.

“It is easy to think that after a while in a field, there is nothing left to learn. I was mistaken.  I learned from a diverse cohort of students in and out of class as well from the faculty,” Douglas said.  “I learned about how younger people look at the world and to value what they had to give.  It really helped get me unstuck.”

Douglas said the Hooding Ceremony was a family celebration that included colleagues from her MSW cohort- Alison Whitaker and Brittany Hall.

“Getting hooded is big for me, I really worked hard. But my family also worked hard for the degree. Without them and my friends, I couldn’t have done it and the ceremony would be incomplete,” Douglas said.