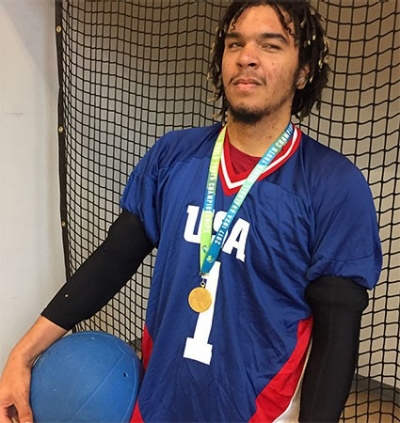 Freshman Sean Walker has won trophies, medals and an MVP honor while competing around the United States and internationally in goalball.

His body twists with the force of a tornado; his frost-tipped dreadlocks go along for the ride. He skips a roughly textured blue ball along the gym floor… straight into a make-shift goal.

For the second and a half it takes the ball to leave Sean’s fingertips until it cradles with a comforting swoosh into the black netting, you can hear each bounce on the hardwood, and if you really tune your ears, you can hear the faint jingles of the bells inside. Those are to alert defenders the ball is rapidly approaching.

He does this about 50 times. Practice makes perfect.

Sean is a superstar in this game, goalball. His dedication to the sport through long practice sessions, such as this one on an ordinary Thursday in February, has skyrocketed him to be among the sport’s top players.

The Radford University freshman from Winchester has been playing for various teams since he was 12 years old. In addition to being a team USA member, he plays once a month for a squad based in Washington, D.C.

He has won trophies, medals and an MVP honor while competing in tournaments around the United States; in Budapest, Hungary; and most recently during spring break at the 2018 Vancouver Goalball Grand Slam in British Columbia as a member of the U.S. men’s goalball team. His team won gold and cash there.

Sean practices, sometimes twice a day, rolling the ball and defending, often alone in on the multipurpose activity court in the Recreation and Wellness Center. One of his main goals these days is to be selected as a member of the U.S. men’s team that will compete in the 2020 Paralympic Games in Tokyo.

Goalball is a unique sport in which the object of the game is to throw a three-pound ball past opponents and into their net to tally points. The net spans the width of the court. There are three players to a side.

Much of the game is played by ear. Players must listen for instructions from their coach, for the bells ringing inside the ball, and the bounces it take across the court. The ball has eight small holes to allow the jingling from the bells to escape from the inside.

Participants have some degree of visual impairment. Some have minor impairments. Others are completely blind. For fairness, all players on the 9-by-18 meter court wear blacked-out goggles. Ropes covered with tape line the court’s parameter to give players a feel for their positioning.

The sport was invented in 1946 to help rehabilitate veterans who had lost their sight while fighting in World War II. It is the only Paralympic competition not derived from another sport, said Sean, who is blind is in his right eye and has no peripheral vision in his left. It’s a condition called Juvenile X-linked Retinoschisis, caused by a detached retina at birth and inherited from his mother’s side of the family.

Unable to play football, a sport he also loves, Sean began playing goalball when he was in seventh grade at the Virginia School for the Deaf and Blind in Staunton. He has been hooked ever since. 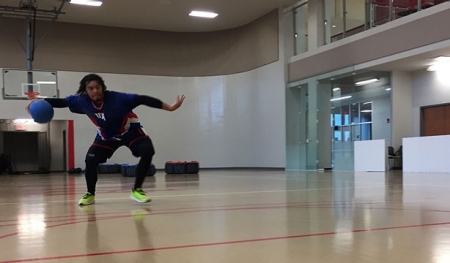 Sean practices a spin throw in preparation for his next competition.

After leading his high school team to winning three conference championships, the coach from the U.S. men’s team called Sean’s coach and said, “Hey, I want this guy on my team.”

Playing the sport has made Sean feel like he is part of something much bigger than himself, he said. “I feel like I’m part of a team. It also has provided me with connections to meet other people and to learn about different people and cultures, especially the trip to Hungary.”

Looking back on his accomplishments, he often reflects on the people who have helped him along the way.

He wants to do the same for others, and that desire is one reason he chose to study recreation therapy at Radford University.

“I would love to work at a rehabilitation center for people with disabilities or injuries, just to help them get back to doing recreational activities,” Sean said. “I’d like to show them that they can do things even though they have a disability.”

Sean’s adviser, Recreation, Parks and Tourism Associate Professor Jim Newman said, “It’s really exciting that we have somebody this young and this excited about his career in addition to playing goalball. The sport ties in perfectly with his career goals.”

Sean is wearing a blue Team USA jersey as he continues to practice. It’s the same jersey, with the No. 1 on the back, he wore when his team captured gold at the youth championships in Hungary and in Vancouver. He does a few light stretches and then switches his drills to focus on defense.

It may be the most difficult and physically taxing part of the game.

Players can take a beating sliding on their ribs across the floor to block shots and from the hard and heavy rubber ball that feels like a basketball. “It can scrape and really sting your ears. Surprisingly, getting hit in the nose doesn’t hurt all that bad,” he explained during a brief break from drills.

Then quickly, he’s back to his workouts, perfecting fundamentals of the game. He runs, stretches and slides on his side across the floor as if a championship point depended on each outstretched effort.

Making those types of plays for the U.S. Men’s Paralympic team is his mission, but if he doesn’t get the call for Tokyo, it’s OK… for now. “There are guys who have been playing this sport longer than I’ve been alive. So, I have some time to make other teams,” he said. “It just means there are people better than me, which means I have work and practice harder.”

For Sean, working hard is like breathing. It seems automatic.

He is athletic, and takes care of his body with exercise. He runs 10 miles on Saturdays and sometimes logs 22 miles on his bike. He can often be seen pedaling around Radford.

Sean wants to eat healthy, too, but late-night Chick-fil-A cravings often get the best of him.

It may be his only weakness.