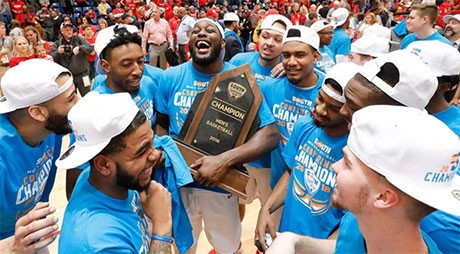 The Radford University men’s basketball team is going to the NCAA tournament after a thrilling, buzzer-beating conference championship win Sunday at the Dedmon Center. The Highlanders’ story has been captured by numerous media outlets, including:

The Roanoke Times
McFarling: Radford made the most of its one day in the spotlight
The hoop where Carlik Jones’ buzzer-beating 3-pointer had dropped through about an hour earlier, giving Radford University a 55-52 victory over Liberty in the Big South Tournament championship on Sunday, no longer had a net. It had been cut and carried away, transformed into a nylon trophy. Read more.

The Washington Post
Radford brings the Madness, but this high school QB hit the craziest title-winning shot
March Madness began in earnest over the weekend, as Radford hit a last-second shot to become one of the first teams to clinch a spot in the NCAA men’s basketball tournament. Read more.

The Roanoke Times
Carlik Jones' buzzer-beater puts Radford into NCAA Tournament
Thanks to a buzzer-beating shot from the Big South freshman of the year, the Radford men’s basketball team is heading to the NCAA Tournament for the first time in nine seasons. Carlik Jones sank a 3-pointer with time running out to give the second-seeded Highlanders a 55-52 win over fifth-seeded Liberty on Sunday at the Dedmon Center. Read more.

NCAA Sports
March Madness: Radford clinches first NCAA tournament bid since 2009 on 3-point buzzer-beater vs. Liberty
The Highlanders are heading to the Big Dance for the first time since 2009 after winning the Big South conference tournament. And it took a dramatic shot at the buzzer to punch the ticket. Read more.