The men's basketball team shares a special moment with the fans after the game.

The cheer echoed through PPG Paints Arena in Pittsburgh in the waning moments of Radford’s NCAA Tournament game against Villanova on March 15. With the excitement and joy emanating from the Radford section, observers would have thought Radford was going to pull the upset.

Radford was down by 26. But that deficit didn’t dampen the mood of the Radford contingent, who were both happy and excited to support their team on the national stage.

The students and fans who made the memorable season possible were rewarded after the game when head coach Mike Jones brought the team over to the most dedicated section in the arena. Coaches and players passionately thanked the fans for the support during the season, which saw the team win the Big South Tournament in dramatic fashion, set a school record for wins and had the team win its first-ever NCAA Tournament game. 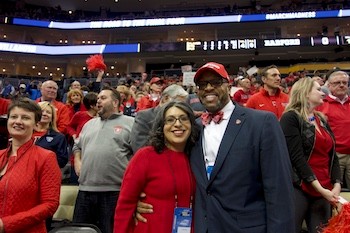 “By the time Coach Jones brought the team and spirit squad over, the entire section was already on their feet cheering loud and proud,” senior Makenzi Gallagher from Virginia Beach said. “To share that moment with the team, as fans, was so special and I think it really speaks to our connection with campus. Some of us had never met before, but in that moment, we were all one community full of pride for how well our team had done.”

Sportscasters and bystanders alike witnessed the power of that moment – a team and its fans that stand together.

“It was an incredible moment when the team came over to the fans after the game. They recognized how important student support is and so many of these fans appreciated the opportunity to share that moment with the team,” said Ann Marie Klotz, vice president for Student Affairs, who chaperoned the student trip along with Dean of Students Susan Trageser. “It was a class act and lovely way to end the season – together.” 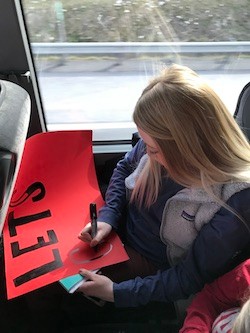 Makenzi Gallagher creates a sign while on the bus to Pittsburgh.

Packed onto two buses and a few small vans, students began the trip to Pittsburgh early on the morning of March 15 from the Bonnie Hurlburt Student Center at 9:30 a.m.

Local media outlets recorded footage of the students cheering as the busses departed – a mood that never dampened during the nearly six-hour trip.

Freshman Maria Bejarano from Woodbridge got the call that there was an extra seat on the bus five minutes before departure.

“I ran to the bus,” she said. “They called me right before the bus was about to leave. I was meeting with my academic advisor in Whitt Hall when I got the call from a friend. I just ran without bringing anything with me.”

Once on the bus, students crafted creative signs to show at the game. Bejarano’s sign urged Villanova to get their “novacaine” ready. Gallagher’s sign urged Radford to get on their dancing shoes. 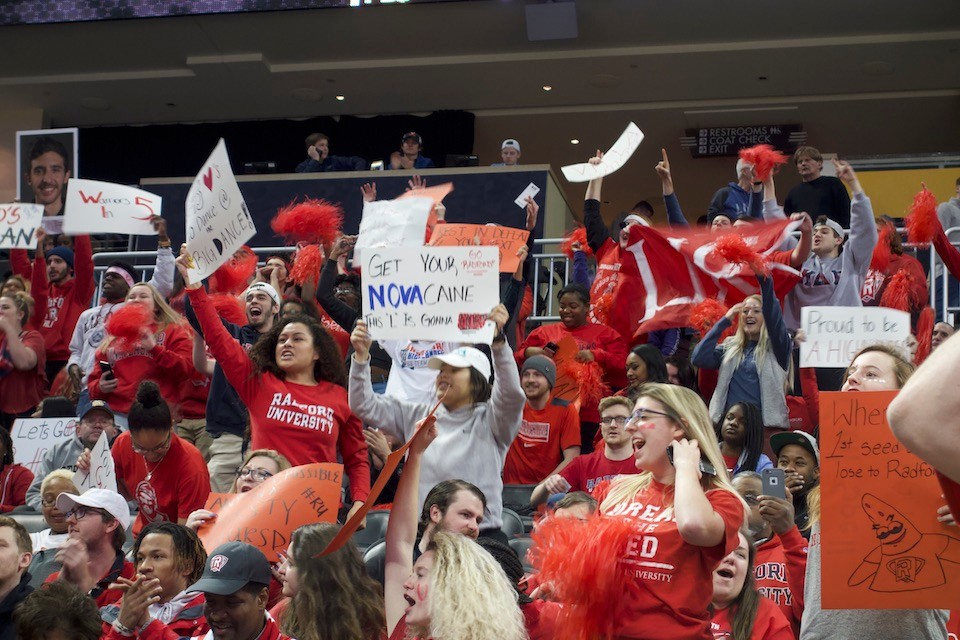 Radford University students cheered the team as they took the court for warmups.

The Highlanders cheered and chanted as they departed the bus – causing the crowd by the gate to turn and look.

As students approached the gate, Radford cheers echoed through the area. Bystanders and media outlets alike watched as the Radford students brought their Highlander pride to Pittsburgh.

“I’ve never been to an NCAA Tournament, so having the chance to go to one is a good experience because most college students don’t have that opportunity,” said Darius Barksdale from Danville.

Emily Monk, a sophomore transfer student from Abingdon, said that it’s been fun having the March Madness experience at Radford University.

“I’ve had family talk about experiences like this and it’s been awesome to discover it for myself,” she said. “It’s been fun. I’m just excited to go and be at the tournament.” 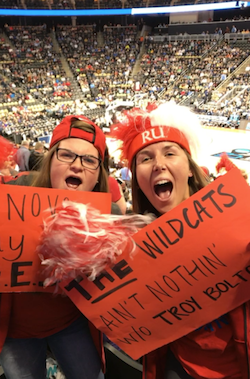 Two students cheer after a made basket.

More than 150 students were selected to attend the game based on a contest in which they had to describe their Highlander pride.

“It was an incredible, once-in-a-lifetime opportunity and I am so grateful that I was one of the students selected,” said Noel Piñeiro from Mayagüez, Puerto Rico. “I didn't really need any more reasons to love [Radford] more than I already do, but the entire experience made my pride in being a Highlander skyrocket. Everything was great - the atmosphere on the bus ride, our fans in the arena, the wonderful game and the opportunity to positively represent Radford once again.”

Gallagher said that rooting for Radford in March Madness was a “surreal” opportunity for her and for the other Radford students.

“I’m very, very thankful that Radford University would take hundreds of students to both of our NCAA games,” she said. “I’m thankful that faculty were willing to step away from work for the day to bus students over six hours away to celebrate this huge moment in history. We have a special community because of it.” 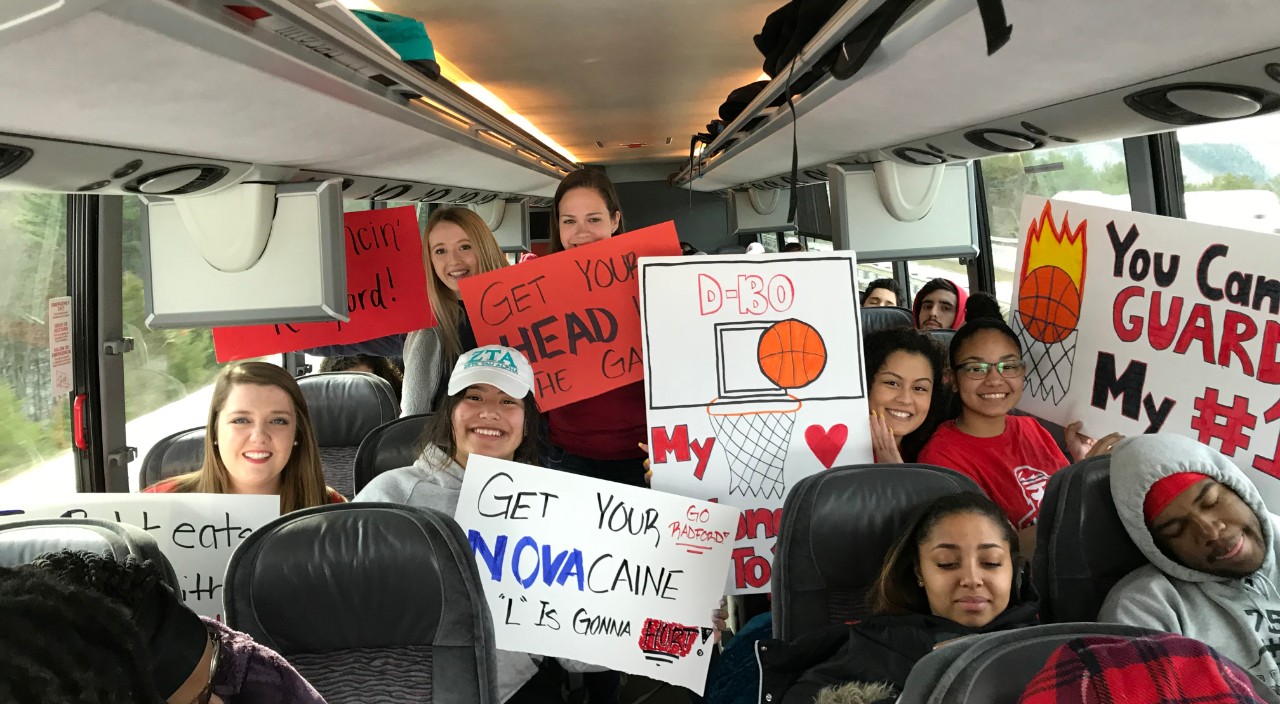 Students show off their completed signs on the way to Pittsburgh for the first round of the NCAA Tournament. Back: Makenzi Gallagher, left, Sarah Butterfield, right. Front left to right: Maria Bejarano, Emily Monk, Kimberly Vallejos and Ocean Adams.

Radford students, faculty, staff and fans showed that it is possible to bring joy and grace to the sport, regardless of the outcome.

“From the face-painting, to the sign-making and the hundreds of posts on social media, these fans showed such heart every step of the way,” Klotz said. “The students practiced chants on the bus ride to the games and really demonstrated the strength and commitment of our Radford community.”

During the game telecast, the announcers said that they were impressed with Radford’s fan showing and support – and even said they wanted to attend a Radford home game next season.

“We received countless compliments on how wonderful our students and fans are all season and especially during the tournament,” Klotz said. “These students came out to the games to support the team and to show immense pride for a university they are thrilled to represent.”