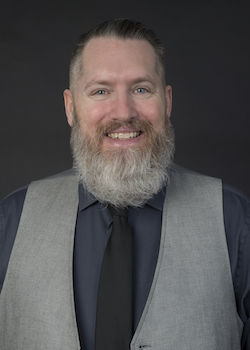 Chair and Associate Professor of Religious Studies Paul Thomas is conducting research on how physical presentations of the Bible are used to form rhetorical arguments and how people reimagine the Bible and associated texts through exhibitions.

Thomas’ research is focused on the Kentucky Creation Museum and Ark Encounter, a full-size replica of Noah’s Ark located in northern Kentucky.

“It’s an incredible thing to see,” he said.

The Kentucky Creation Museum and Ark Encounter seeks to demonstrate that the Earth is roughly 6,000 years old and that Genesis chapters 1-2 account of creation is scientifically accurate, according to Thomas.

Thomas sought to find the impact the attractions had on museum patrons by communicating with them directly. However, he was respectfully asked not to do so by members Answers in Genesis, an apologetics, or Christianity-defending, ministry group that crafted the museum’s attractions.

According to their website, the organization is dedicated to helping Christians defend their faith and assist with answering questions about the Bible, particularly about the book of Genesis.

After strictly observing the visitors, Thomas decided to contact them another way.

He began studying previous visitors’ written reviews of the museum on websites, such as Facebook and TripAdvisor. After communicating via email and collecting the visitors’ contact information, Thomas began conducting phone interviews. He interviewed the individuals about their encounter with the attractions and how the displays affected their understanding of the Bible in order to determine if they were resistant or accepting of the museum’s argument.

Although Thomas had no hypotheses when beginning the research, he came to what he called a “surprising” conclusion.

“There are a fair number of people who identify as Christians who are resistant to Answers in Genesis’ argument and the use of the Bible to make their argument,” Thomas said.

Thomas said research also suggests that “The museum is linking the readings of the Bible to America’s social, political and economic issues. The Answer in Genesis is arguing that if they can get people to take the Bible literally again, then God will favor the nation and the problems will be resolved. The Creation Museum has had millions of visitors since it has opened in 2007 - alone says that this is no mere curiosity that something is going on.”

Thomas has completed a majority of his research and has two-thirds of his book draft completed. His next steps include finalizing a few more chapters, analyzing interview data, and finding a publisher.

Thomas’ experience gives a chance for students to gain from his opportunities by bringing his research into the classroom. Thomas uses the development of his research as an example for students to grasp concepts more easily and understand the research process. Thomas also uses Answers in Genesis as examples and to lead discussions in class. An undergraduate student worked with Thomas on some of his research by visiting the museum and collecting photos and details of the displays during the origin of the process.

Thomas’ research was funded by a grant from the College of Humanities and Behavioral Sciences. This grant supported his stay in Kentucky and some of the software he used to complete his research.