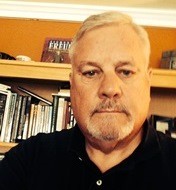 He’s worked with the Roanoke Police Department and the Virginia State Police – and most of the three-letter agencies in the United States.

Radford University Criminal Justice Professor Isaac Van Patten, an embedded criminologist in the Roanoke Police Department, began working for the Roanoke PD in 2005. A former student, Jennifer Coner M.S. ‘01, worked at the department as a crime analyst. Coner presented Van Patten with some special projects, and his involvement with the Roanoke PD began.

Van Patten primarily teaches courses in the area of crime analysis at both the graduate and undergraduate levels – and having the real-world experience allows him to apply it in the classroom.

“In courts and criminal process course, that’s where the students study how a case moves through arrest to trial through sentencing and all the legal processes and procedures that are involved with that,” Van Patten said. “Being involved with cases at all of those stages allows me to give them examples.”

Van Patten said that from a time a crime is committed to until it is fully adjudicated by the courts can take up to three years.

One of the projects Van Patten is currently assisting with is gun violence suppression.

“We’re looking at where in the city firearms offenses are occurring – guns stolen, being used, shots fired – those kinds of things,” he said.

I find the diversity of things I can get involved with stimulating. Working for and with law enforcement has given me a tremendous amount of diverse opportunities.

Earlier this year, a series of robberies was occurring in Roanoke and Van Patten worked on geographic profiling, a method of determining an offender’s residence or main base of operations, and event prediction of the robberies.

“As soon as I had three events, that gave me a triangle we could use to begin to develop a geographic profile,” Van Patten said. “We use geographic profiling in two ways. We try to identify a location that the offenders would be operating out of, a base. It’s usually where one of them lives or works. The second is by tracking the movement around the city, next event prediction, or where they are likely to hit next.”

Van Patten said they noticed some characteristics of the robberies – each location wasn’t franchised, had less security and tended to be on street corners. Each location had half-glass windows or items that obscured vision of the front register.

“We did a days-between hits analysis of how long the money lasts them,” Van Patten said. “We can predict when they would hit again. They averaged six days between hits, plus or minus two days. Hits also happened fairly late at night, usually after 10 p.m. but before 1 a.m.”

The Roanoke Police Department made up a target list of convenience stores in the Roanoke Valley. Each time a hit was made, it further refined the list.

“On the day that we caught them, they hit way out in the northeast part of the city – that was way outside the range of our prediction, but they came back in to do a second robbery in the city and that was one of our predicted locations that we already had under active surveillance,” Van Patten said. “The officer saw them pull into the parking lot and we were able to arrest them at that point in time.”

Working with the police department, Van Patten said, has been beneficial because “I’m a very applied individual and by keeping my hands in active work, it has been personally and professionally fulfilling for me in a sense that I’m teaching something, I understand the real-world application and limitations and can help the students understand the two.”

Van Patten has also worked with first- and second-generation criminal profilers out of Quantico and found it rewarding to take that experience into the classroom.