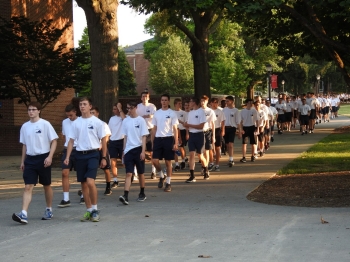 Radford University is hosting the 76th session of the American Legion Boys State of Virginia.

As the sun set over Radford University on June 17, hundreds of young men from across the Commonwealth got their first taste of the 76th session of the American Legion Boys State of Virginia.

Dressed in traditional Boys State uniforms of navy blue shorts and white T-shirts to beat the heat, the men gathered in rows on Heth Lawn then eagerly and excitedly filed into Bondurant Auditorium for the opening ceremony.

Radford University is hosting the annual summer program of about 700 exemplary male high school students, in addition to Boys State staff, for the sixth consecutive year. The young men, all juniors, are selected to participate based on academic achievement, leadership ability, civic engagement and citizenship. In many cases, attendance costs are covered by a sponsoring American Legion Post, local business or other organization.

Participants will spend a week on campus, June 17-23, learning about American civic principles and participating in a simulation of Virginia government. Activities include mock legislative sessions, court proceedings, law enforcement presentations and assemblies, as well as music and recreational programs. They will also be visited by some of the top leaders in state and local government, including Dels. Chris Hurst and Nick Rush, Lt. Gov. Justin Fairfax and Virginia Gov. Ralph Northam.

During the opening ceremony Sunday night, the young men were welcomed to the university and the city of Radford by Vice President for University Relations and Chief Communications Officer Joe Carpenter and Radford City Mayor Bruce Brown.

On behalf of President Brian O. Hemphill and the entire Highlander family, Carpenter told Boys State participants that Radford University “is distinctly honored to be the host for this most unique and special experience.”

“We pride ourselves in providing our students the opportunities to pursue their dreams that they did not think possible. And since 2013, it’s been our special privilege to host the annual Virginia Boys State,” Carpenter said.

He also shared what he gained as a former Boys State participant.

“What I’ve grown to appreciate from that one week is that Boys State not only taught me about our government and the vital role of citizenship, it opened doors and prepared me in ways that I still apply today,” he said. “Through your experience at Boys State, you’ll learn more through what we call experiential learning about democratic government, freedom and patriotism and the essential role that citizenships plays. Arguably, it’s the practice and process that binds them all together and makes them a living reality.” 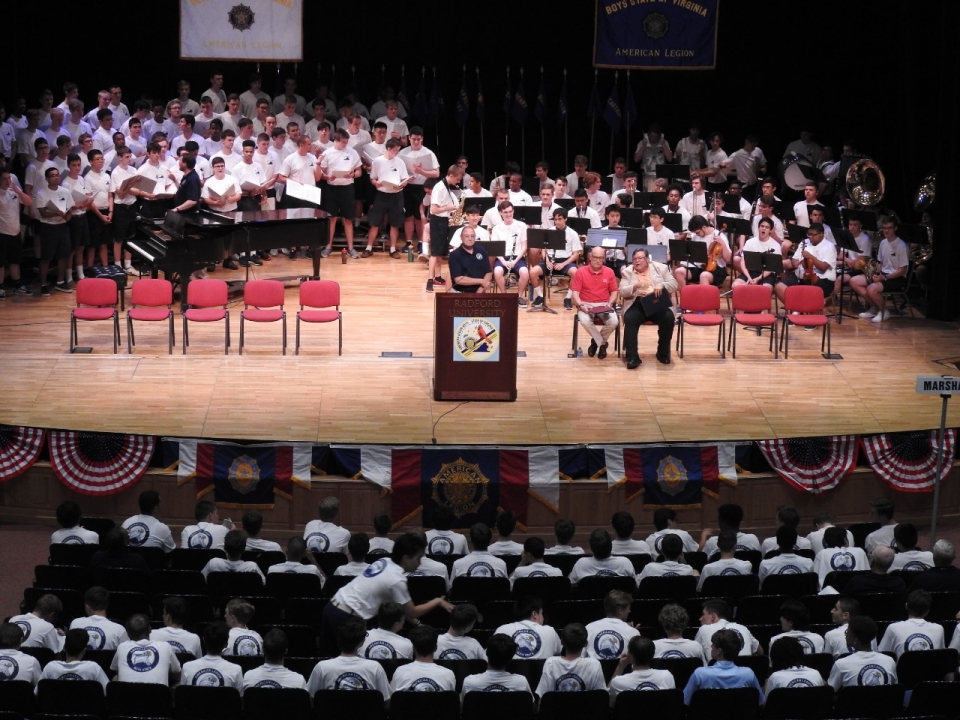 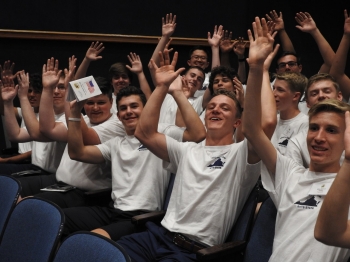 Boys State of Virginia 2018 participants at the opening ceremony in Bondurant Auditorium.

Brown urged the young men to “soak in” the unique and influential Boys State experience.

“Use it as a spring board to live a more productive life,” Brown told participants. “I challenge you to take what you learn this week and make a difference.”

“I used to be sitting where you are 56 years ago,” Cobb said. “A lot has changed since then…It doesn’t matter what happens 50 to 60 years from now, what will remain constant is what you learn here at Boys State.”

Cobb told the young men that they are “the leaders of tomorrow” and the “problem-solvers.”

“I know you are going to solve the problems that we leave you,” Cobb said. “And don’t let anybody tell you that are not the best. Be a man of character.”

Following his remarks, Cobb took questions from participants during a Q&A session. He shared insightful wisdom, inspiration and advice he gained during his participation in Boys State and the military, including the importance of self-discipline, time management, diversity, collaboration and a solid educational foundation.

“It’s key to everything,” he said.

The 76th session of American Legion Boys State of Virginia will conclude on Saturday, June 23, with a ceremony that includes awards and recognitions, a farewell address by Boys State Director Gerald Rhoads and a grand finale by the Boys State Band and Chorus.