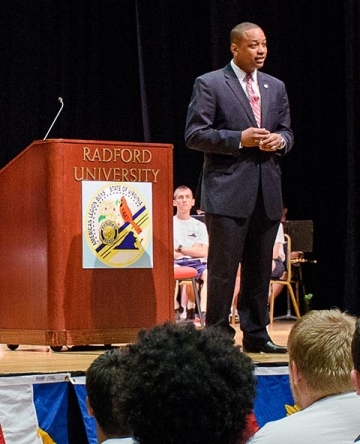 After donning the navy golf shirt that marked him as a member of the 76th session of the American Legion Boys State of Virginia, Lt. Gov. Justin Fairfax, took the baton and led the band.

During his remarks on June 20 that preceded his stint as conductor, Fairfax offered inspiration, professional guidance and insights into his job as Virginia’s 41st Lieutenant Governor.

“You are the latest shining example of the brightest lights we have in the Commonwealth of Virginia,” Fairfax said during his remarks to more than 700 rising seniors from across the state who gathered on Wednesday in Radford University’s Bondurant Auditorium.

Fairfax – a former assistant United States Attorney, a veteran of the legislative, executive, and judicial branches of government and a businessman – resonated the patriotic focus of the residential summer program, sponsored by Virginia’s American Legion, in which young men are immersed in American civic principles.

“We know the secret sauce of the American Dream is that no matter where you start, where you are born, the color of your skin, the God you pray to, the money that your family has or what zip code you live in, you get a shot to rise and your family gets a shot to rise,” Fairfax said.

Before detailing the varied job description of a lieutenant governor, Fairfax told how he took the oath of office with copies of the manumission documents that freed his great great grandfather from slavery 220 years ago in his jacket pocket. 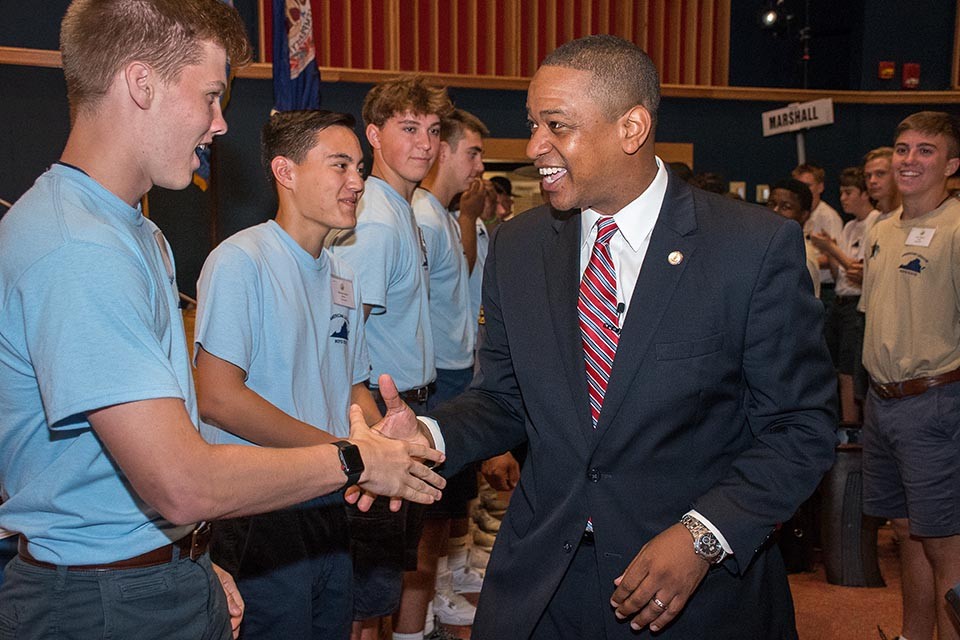 “I tell you that story because it really is an American story. It is a story about who we can be when we rise to our highest ideals and adhere to our highest values,” Fairfax said.

The Boys State experience, Fairfax said, would be invaluable to the young men who were selected to participate based on academic achievement, leadership ability, civic engagement and citizenship.

“Boys State is a program that reaffirms our American values: freedom, justice, liberty, making sure everyone has a chance to rise and opportunity for all,” Fairfax said.

Fairfax charged the 2018 Boys State students with sharing their experiences upon their return to their homes and into their futures.

“It is important to make sure that our communities are strengthened by your experience. You are ambassadors for what is good and is best of civic engagement in public life here in Virginia,” Fairfax said.