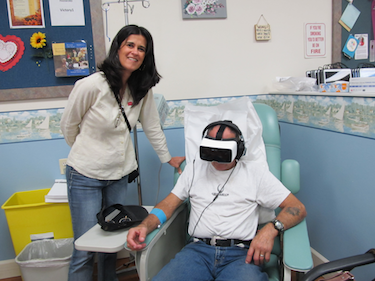 Scates, left, with a participant in her research.

While at Radford University, Diana Scates MFA ‘18 used virtual reality to reduce stress and pain during cancer treatments for patients in a research project.

Scates, originally from Brazil, had inspiration for her design thinking graduate project, called “Virtual Reality for Cancer Patients: A Design Thinking Approach for a Sensory Experience to Reduce Stress and Pain,” come from a few sources. As someone who overcame cancer herself, she wanted to ease other’s treatment. She also has a passion for technology and design.

Scates said she chose the topic because of her desire to help others through the difficult time in their lives. “This isn’t just a project for me,” Scates said. “I was blessed to be there with the patients and see them. It was very rewarding on a personal and professional level.”

The project involved the use of virtual reality glasses. Two VR One glasses were donated by Zeiss, a popular lens manufacturer, and equipment was borrowed from Computer Graphics Works Virtual Reality to make the study possible.

The virtual reality scenes viewed by the cancer patients during their IV procedure allowed each patient to travel to peaceful environment. One outcome from the research project was the triggering of past memories.

“[A patient] started to elaborate and tell me a story of when he was a kid,” Scates said. “In that moment, seeing the water in the simulation was so powerful in his mind that it triggered his memory to a particularly happy moment when he was a kid. It was very rewarding hearing that.”

The research opened a new opportunity in how the virtual reality that we presented triggered memories in the patients that made them feel as if they transported to a place that reminded them of when they were a kid. It gave them happy thoughts.

In order to have moments like that, Scates conducted in-depth research using design thinking strategies that included doctors, nurses, caregivers and former cancer patients. They provided critical responses that allowed Scates to customize the scenarios used in the virtual reality glasses.

“The oncologists and nurses gave feedback that was from taking care of people, but not patients themselves,” Scates said. “The feedback pertained to what they do and what they observe as being the patients’ needs. That didn’t always match with the needs of the patients themselves. That was very important to me and very surprising to see the different between the groups.”

After former cancer patients viewed the pilot scenario in the virtual reality glasses, adjustments were made. Any passing reference to a city or anything that could be perceived as stress was removed. Each of the 10 scenarios was planned, filmed and created by Scates.

“The VR environment varies person to person,” Scates said. “I worked to craft a variety of scenes that could be calming for the patients. Because of my initial results, I found scenes of families and children playing that would distract their minds.”

Scates said the clinic staff and doctors were all receptive to her work.

“Everybody there was very open to having the technology applied,” she said. “They were very receptive. I also worked with a clinic in Florida whose majority of people were 65 and over. They were really excited about the research.”

The results of the research were as expected, Scates said, with the exception one thing: pleasant thoughts.