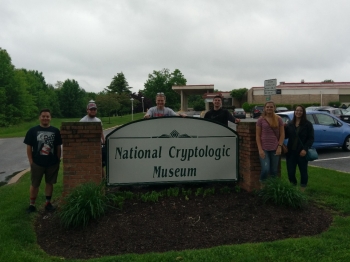 The Radford University group at the National Cryptologic Museum in Maryland.

Department of Mathematics and Statistics Professor Neil Sigmon led Radford University students on a cryptic adventure to Washington D.C. and England this summer.

Their enthusiasm never wavered throughout the trip, Sigmon said.

“The students were really excited and interested,” he continued. “They were willing and ready to go every morning…They definitely kept me going.”

Both at home and abroad, the group set out on a mission to unravel the mystery of cryptography, the art of writing or solving codes.

“I’ve never really studied the techniques, and I thought this trip would allow us all a chance to do so together,” Sigmon said.

To prepare for the trip, Sigmon and students started meeting on Saturdays this spring to study cryptology and encryption devices and talk about the logic behind them, Sigmon said. Their study sessions also included a screening of the blockbuster film, “The Imitation Game,” which is loosely based on a biography of British cryptanalyst Alan Turing, who decrypted German intelligence codes for the British government during World War II. 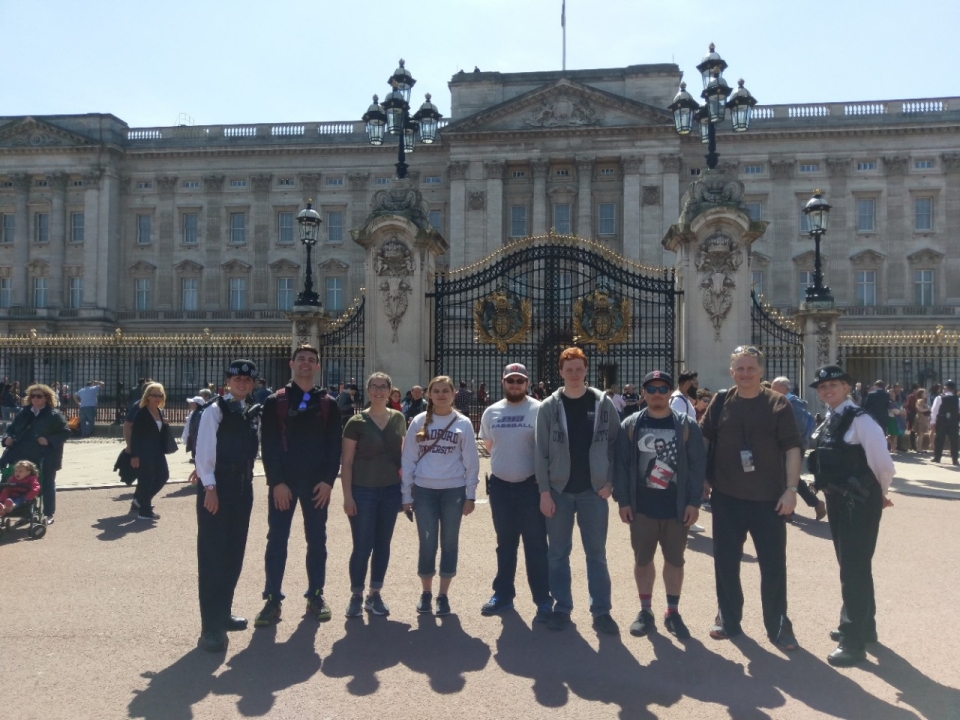 Outside of Buckingham Palace 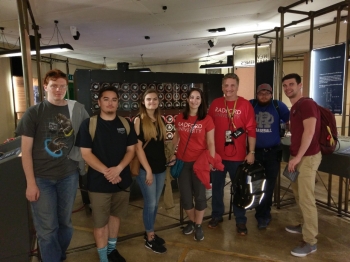 Standing in front of the Turing Bombe at Bletchley Park. The bombe was an electro-mechanical device used by British cryptologists to help decipher German Enigma-machine-encrypted secret messages during World War II.

The Radford group left for Washington D.C. on May 23 to sightsee and visit the National Cryptologic Museum. Located adjacent to National Security Agency Headquarters at Ft. George G. Meade, Maryland, the museum houses a collection of thousands of artifacts that collectively serve to sustain the history of the cryptologic profession.

In England, the group spent a week broadening their cryptic knowledge.

With the help from Global Explorers, a family-owned-and-operated touring company out of Lynchburg, they visited Parliament, Buckingham Palace, the Churchill War Rooms, Piccadilly Circus, the Tower of London and Windsor Castle, which was buzzing with activity as the wedding of Prince Harry and Meghan Markle (now Meghan Duchess of Sussex) approached.

“The tour guides shared a wealth of knowledge,” Sigmon said. “We really enjoyed every stop.”

A critical stop and trip highlight for the budding cryptologists was Bletchley Park, the central and top-secret site for British and Allied codebreakers during WWII. There, they worked to decipher the military codes and ciphers that secured German, Japanese and other Axis nation’s communications. This produced vital intelligence in support of Allied military operations on land, at sea and in the air.

On the last day of the trip, students visited the British Museum and British Library, where the original Magna Carta is displayed.

“The trip and the students exceeded my expectations,” Sigmon said. “I lucked out.”