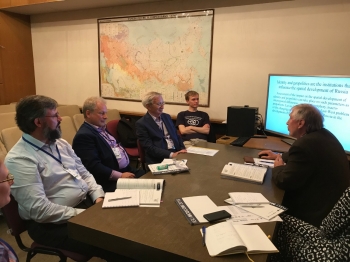 Department of Geospatial Science Professor Grigory Ioffe traveled abroad this summer to present and gather more knowledge on a topic of his expertise – the Republic of Belarus.

From May 23-25 and June 4-6, he attended and presented at two international forums in Belarus and Russia. A longtime Radford University faculty member and Moscow native, Ioffe specializes in human geography and has been focusing on Belarus since 2002-03.

The May forum, held in Belarus’ capital of Minsk, was one of great significance, Ioffe explained.

Attendees included several high-level officials, including controversial Republic of Belarus President Alexander Lukashenko – the country’s first and only leader since 1994 - and 350 national security experts from around the world.

A landlocked country in Eastern Europe, Belarus is often “blended with neighboring countries, especially with Russia,” and has struggled to distinguish itself, Ioffe explained. Labeled by many as Europe’s last dictatorship as a result of Lukashenko’s authoritarian style of government, the country of about 9.5 million people has positioned itself as a neutral ground for negotiations. In 2015, the leaders of Russia, Germany, France and Ukraine gathered in Minsk to negotiate measures to alleviate an ongoing war in the Ukraine.

“Since then, Belarus has been working to strengthen its identity and open up to the western world,” Ioffe said.

The May 24 Minsk Dialogue Forum, formally called “Eastern Europe: In search of security for all,” was a culmination of these efforts. 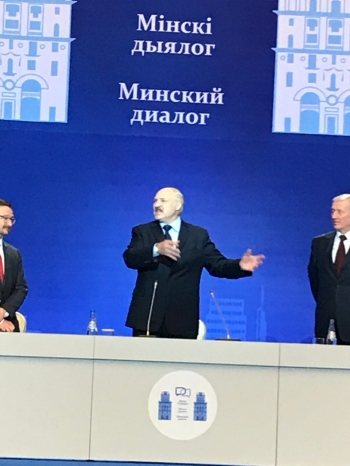 Republic of Belarus President Alexander Lukashenko speaks at the Minsk Dialogue Forum. On the left stands Thomas Greminger, chairman of the Organization for Security and Cooperation in Europe.

In an article Ioffe authored for the Eurasian Daily Monitor, the flagship publication of the Washington-based Jamestown Foundation, he discussed “mutually confrontational” statements that led to some “heated” and “soothing” arguments at the Minsk Dialogue forum.

“Among other things, [President] Lukashenko talked about the danger of ‘mutated challenges’ to the system of international security in Europe and globally,” Ioffe wrote in the Jamestown article, titled ‘Successful International Security Gathering in Belarus Brings Together East and West.’ “Those challenges imply cyber methods of information wars. At one point, he [Lukashenko] referred to Russia as Belarus’s ally and mentioned the enlargement of the North Atlantic Treaty Organization (NATO) as a factor that led to the current tension in Europe. However, he also suggested that Belarus is ‘neither with Russia against Europe, nor with Europe against Russia.’”

Ioffe called the forum “a political opening” and an “unprecedented event” for the Republic of Belarus.

In Moscow, Ioffe attended the International Geographic Union Thematic conference dedicated to the centennial of the Institute of Geography of Russian Academy of Sciences. Ioffe worked at the Institute from 1980-89. There, he presented on Belarus, comparing the Republic to its neighboring country of Ukraine.

Ioffe has worked at Radford University for 28 years. His teaching and research specialty is broadly-defined human geography. Within this discipline, he has conducted research in the areas of population geography, geography of agriculture, geopolitics and national identity. His research has focused on East European settings and on processes with pronounced spatial dimension, typical for post-Communist countries.

Ioffe has authored and co-authored nine academic books, as well as dozens of peer-reviewed articles. Many of his essays about Belarus can be found on The Jamestown Foundation website.