Debate: Is war ever justifiable 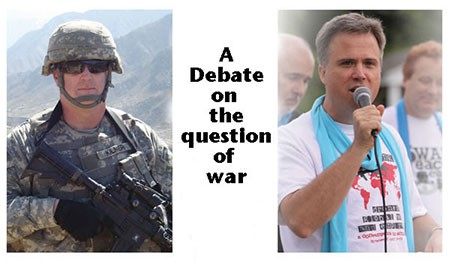 Radford University Peace Studies is hosting an event in February in which two expert participants will debate the question: Is war ever justifiable?

Writer and military ethicist Peter Kilner and journalist and peace activist David Swanson will discuss the topic at 7-9 p.m. Feb. 12 in the Hurlburt Auditorium. The debate is open to the public, and admission is free. Philosophy and Religion Professor Glen T. Martin will serve as moderator.

“The issue of this debate is one of the great issues of our day, for both students and all thoughtful citizens. The forms of war have mutated rapidly with development of ever more dangerous weapons as well as global terrorism and the military responses to this phenomena,” Martin said. “The issue of war versus peace defines our lives, our economy and our future. Both participants in this debate are highly respected and widely known.”

Kilner served more than 28 years in the U.S. Army as an infantryman and professor at the U.S. Military Academy. He deployed multiple times to Iraq and Afghanistan to conduct research on combat leadership. He is a graduate of West Point and earned a Ph.D. in education from Penn State and a master’s degree in philosophy from Virginia Tech.

Swanson is an author, activist, journalist, radio host and director of WorldBeyondWar.org. A three-time Nobel Peace Prize nominee, he has authored the books “War is a Lie” and “War is Never Just.” Swanson holds a master’s degree in philosophy from the University of Virginia.

Radford University Peace Studies includes research, reflection and dialogue concerning the causes of conflict, disharmony, misunderstanding, violence and war. It is the simultaneous study of the principles of harmony, communication, interpersonal relationships, organization and wisdom necessary to establish peace, resolve conflicts and promote open, communicative and positive relationships at all levels among human beings.