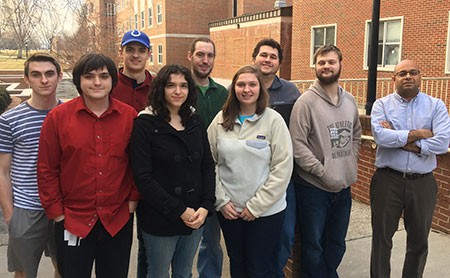 Radford University’s Cyber Defense Club has qualified for a spot in the regional finals of the Mid-Atlantic Collegiate Cyber Defense Competition (MACCDC).

It’s the fifth time in seven years the team has reached the regional contest, which this year is scheduled for March 15-17 at the Johns Hopkins University Applied Physics Laboratory in Laurel Maryland.

During the competition, students were challenged in a scenario in which they had to defend a fictitious company from nine online server attacks from a team of hackers, explained Radford University Computer Science Professor Prem Uppuluri, the team’s faculty advisor. “The goal is for the team to put up cyber defenses.”

Teams are “given a limited amount of time to secure up to 12 computers before live hackers, called the red team, start attacking those computers,” said Jacob Walters, a junior computer science major from Vienna, Virginia, and Cyber Defense Club president. “Within minutes of the red team starting their attack, we start to see our computers feel the effects.”

Adding to the drama, teams are challenged with installing and configuring software applications – these are referred to as injects at the competitions –for the company at the same time attacks are being waged.

Some injects require certain company services remain up and running for continued customer use. Teams, made up of eight members, including a captain, are given points for the number of injects completed and the number of attacks defended.

“It’s very intense. It gets on peoples nerves quite a bit, and that is the goal of the hackers, to make you cry,” Uppuluri joked.

The regional competition will be similar, but on a larger scale, the professor explained, lasting for about 15 hours over two days.

It’s a pressure packed event, designed to test students’ technical skills and abilities to handle pressure. “Teamwork is important in these events,” Uppuluri said. “When teams are under pressure, they often disintegrate, and there can be fights among team members.”

Radford University’s Artis College of Science and Technology offers bachelor’s degrees in computer science and technology and information science and systems, as well as undergraduate certificates in cybersecurity and web development.