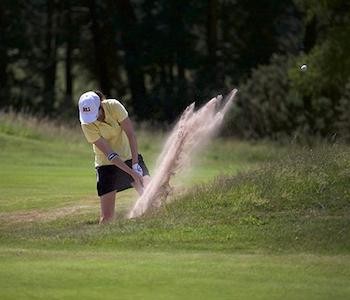 Condon takes a swing at the ball while playing for Lincolnshire in a regional county match.

From across the pond, Kirsty Condon ’14 left the home that she knew to explore a new culture – something she always dreamed of doing.

The United Kingdom-native grew up playing golf and started playing the sport at age 5. As she wrapped up her secondary education, she knew she wanted to go state-side to continue her lifelong education while playing the sport that she loved.

“I’ve always been interested in other cultures, so this was a good way for me to live somewhere else and do something that I loved while getting a quality education.”

Condon majored in German and minored in French, Spanish, management and marketing – all while balancing the time demands of being a Radford University student-athlete.

“There was a trade-off triangle that I saw which was comprised of sport, school and sleep,” she said. “For me, I sacrificed the sleep element. My academics are really important to me and I set very high standards for myself.”

Having begun studying foreign languages at age 11, Condon developed a passion for other cultures and a desire to learn as much about them as possible. Grammar and the structure of the German language piqued her interest as an area of study.

“From a mastery perspective, when you learn English, because it is done so naturally, you don’t really appreciate the complexities of the language itself,” Condon said. “When you learn another language, you get an appreciation for the difficulties that other people go through to communicate with you on that global platform.”

I do feel a deep connection with the people of those cultures. I think that it’s nice when I think of a word in a different language because it feels like the language is a part of my identity.

Some of the difficulties Condon faced were eased through her use of the Language Lab in the College of Humanities and Behavioral Sciences. The Language Lab allows students to work with a language hands-on, escaping the traditional boundaries of a textbook.

“You don’t learn the colloquialisms of a language as well from a textbook,” Condon said. “Having that extra time with a native to that language helps you get more familiar with how you naturally say things in a different tongue. That one-to-one time in the lab was really helpful from that perspective.”

During her time at Radford, Condon found herself studying three languages concurrently. Because of the origins of the languages – with German a Germanic language and French a romance language – separating the two wasn’t too difficult. When she added Spanish, also a romance language, into the mix, it presented her some challenges.

“I’d start saying a sentence that I could only finish if I threw in a few French words,” she said. “Or I’d be in an exam and think ‘this is so annoying because I know the word in French, I know the word in German,’ but I couldn’t remember the word in Spanish. Sometimes I wanted to throw in words from other languages.”

Condon said that same feeling of not being able to remember a word could also happen when speaking English. That feeling is “a bit weird,” according to Condon.

“I think it all depends on the context in which you’ve studied a given topic,” she said. “There are certain subject matters that I’ve studied in a foreign language class that I haven’t studied as intensively in my own tongue, so some words from those areas will actually come easier to me in the foreign language.” 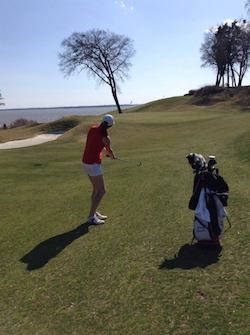 Condon participating in the practice round at Kingsmill in Williamsburg while a student-athlete at Radford University.

To fully experience the German language and culture, Condon participated in a study abroad during her time at Radford. The trip was an intensive course at the Goethe Institut in Freiburg, Germany that provided her the opportunity to learn a language in the country itself with people from all over the globe.

“In this context, we were tied together by our common knowledge of German – not English,” Condon said. “When you were socializing outside of the classroom, you were speaking German. You’re taking all the classroom learning and applying it in your daily life for a month.”

That level of immersion in the German culture resulted in Condon unlocking aspects of that culture previously unknown to her – such as opera. Condon said that experience opened her eyes to a new pastime. It was also an opportunity to get better acquainted with the local cuisine, including Leberkäse and Schwarzwälder Kirschtorte.

Having completed her Radford education, Condon now works at Accenture, a global management consulting and professional services firm. Her first role at the company required her to work with stakeholders in South America. Condon used her Spanish to communicate with them.

“If you have a basic understanding of someone’s language and you are even just able to introduce yourself it puts people at ease. It establishes a relationship quickly if you can do that, which is particularly useful when managing senior stakeholders,” she said.

Condon said that her experience with language and sport were factors that helped her stand out from amongst the field when starting her career.

“Language can be a differentiator between different candidates,” she said. “The foreign language department at RU does a fantastic job of preparing students to begin their careers and equipping them with skills and experiences that stand out among a field of candidates.”