"BEFORE and BEYOND WORDS" cast reflects on performance

The School of Dance and Theatre wrapped up two performances of the collaborative work “BEFORE and BEYOND WORDS” on Jan. 26-27 at the Albig Studio Theater.

To come up with the idea for the performance, Assistant Professor and Director of the show Robyn Berg worked alongside adjunct professor of the dance department Katie Wells, who was the choreographer, sound designer and sound operator of the performance.

“[Katie] is a wonderful woman with a lot of creativity. I think that we were very different forces in the room, but I think that was a very good balance for the [students],” Berg said.

The play was compromised of an all-female cast of eight and was loosely based on Joseph Campbell’s “Hero’s Journey,” which follows the template of a story involving a hero answering a call to adventure and emerges transformed from the experience.

“It let them have the freedom to create who those characters were and what kind of adventures they went on and what kind of allies or enemies they met in the process,” Berg said. “So while there was structure in the form of Campbell’s Hero’s Journey, there was still a lot of creative freedom in the part of the ensemble.” 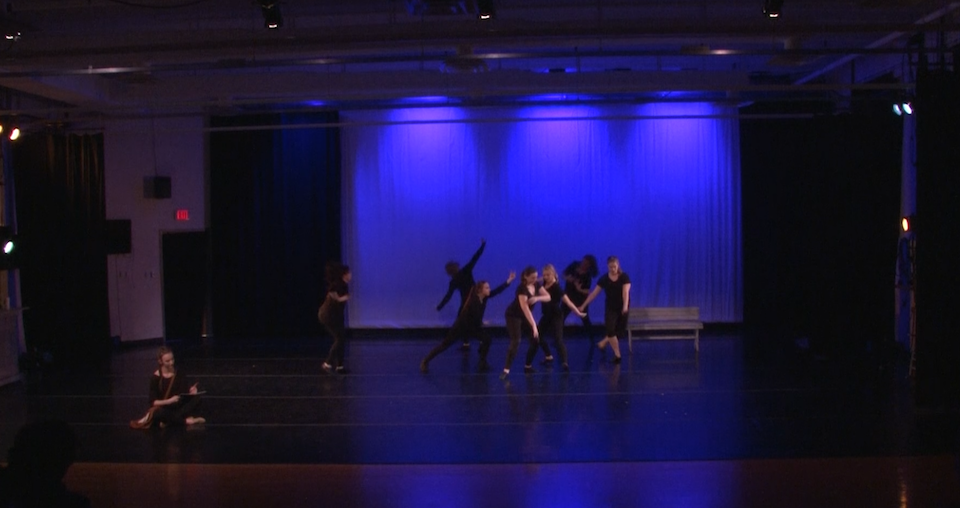 Students perform in “BEFORE and BEYOND WORDS.”

The cast began preparation for the show and reviewed examples of the Hero’s Journey. They customized the characters, the direction, tone and message of their play. The production was outside the norm for the department.

“We are almost always using a script to begin the creative process - at least in the theater department. But was an entirely ensemble-created piece, so it was a fun and unique challenge,” Berg said.

Caroline Beard from Warrenton played the Hero and Robin McGrath from Herndon portrayed Hope. The actors spent last fall determining the layout of the show and perfecting the personalities of their characters.

“It was really easy to make a plot because we already had the plot,” McGrath said. “We could make our own characters and figure out what we wanted to have happen because we had a little road map for it.”

The actors were able to enjoy forming their characters based on character templates from the Hero’s Journey. Traditional archetypes such as The Hero, The Shadow, The Shape Shifter and The Caretaker were able to be customized and embodied through song and dance to tell a custom story.

Both of the actors said that it was “easy” to slip into their character’s roles.

“We also had a lot of freedom to bring in what we thought the character could be. Because it isn’t a play that has been done a million times before and it has to be this certain way,” Beard said.

Berg saw some reliability to the characters in the performance.

Beard’s journey to “BEFORE and BEYOND WORDS” was different than McGrath’s - Beard is a dancer, not an actor. “I’m used to speaking with my body, not with my voice so much,” Beard said. “It’s not something I’m super comfortable with [doing.]”

The two actors wanted messages of self-love and strength to leave with the audience.

“Have the strength to do what you need to do, even if it’s not the easy way,” McGrath said.

“I hope that people took away that sometimes you need to put [technology] away,” Beard said. “Put your phone away and focus on the internal instead of always being so external.”

For a list of upcoming College of Visual and Performing Arts events, visit their event calendar.