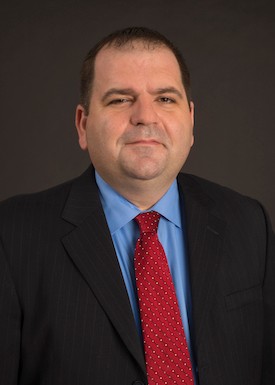 With a virtual reality system purchased last summer, Wright established a lab for the Department of Criminal Justice, located in the College of Humanities and Behavioral Sciences, to expose students to how virtual reality can be used in criminal justice.

While the use of virtual reality is more popular in the United Kingdom criminal justice system, there are police departments in the United States that are using it, such as the Virginia State Police and the Roanoke Police Department, said Wright.

“A lot of larger police departments and investigative units are starting to use virtual reality to capture crime scenes so they can go back into crime scenes to view it the way it was the first time instead of using pictures,” Wright said.

The driving factor behind the creating of the Criminal Justice Virtual Reality Lab was exposing students to the evolving use of the technology in criminal justice environments.

“As I’ve gotten into [the research], I’ve seen a lot more possibilities with anything from taking students on virtual tours,” Wright said. “My corrections class had the opportunity to go on a virtual prison tour. They go into a prison – and go inside a cell – to bring some realities to a lot of things I talk about in class. The class also went on a real-life prison tour this semester.”

Wright said the Department of Criminal Justice at Radford is exploring purchasing a scanner to create their own virtual environments that would allow the creation of virtual crime scenes without having to set up the crime scenes multiple times.

“We can go to existing virtual environments now to practice those skills,” Wright said. “I see [virtual reality] expanding, not only into the larger police departments, but also the smaller departments.