The Radford University Board of Visitors (BOV) held its quarterly meeting Dec. 6-7 in the University’s Mary Ann Jennings Hovis Memorial Board Room.

At this meeting, the BOV welcomed the Highlander women’s soccer team and 2018 Big South Conference regular season and tournament champions and approved a resolution of appreciation honoring Bobby Hickman, a parking enforcement officer, for his outstanding service to the Radford University family.

Matt Dunleavy, IMPACT executive director, briefed the BOV on the status of the IMPACT program. Currently, there are 40 participants enrolled in cybersecurity and geospatial certificates, and 464 teachers enrolled in the ASSET program. Dunleavy also briefed the BOV on performance objectives and goals, and strategic partnerships and recruitment. Dunleavy also discussed IMPACT in year one and looked ahead to year two. 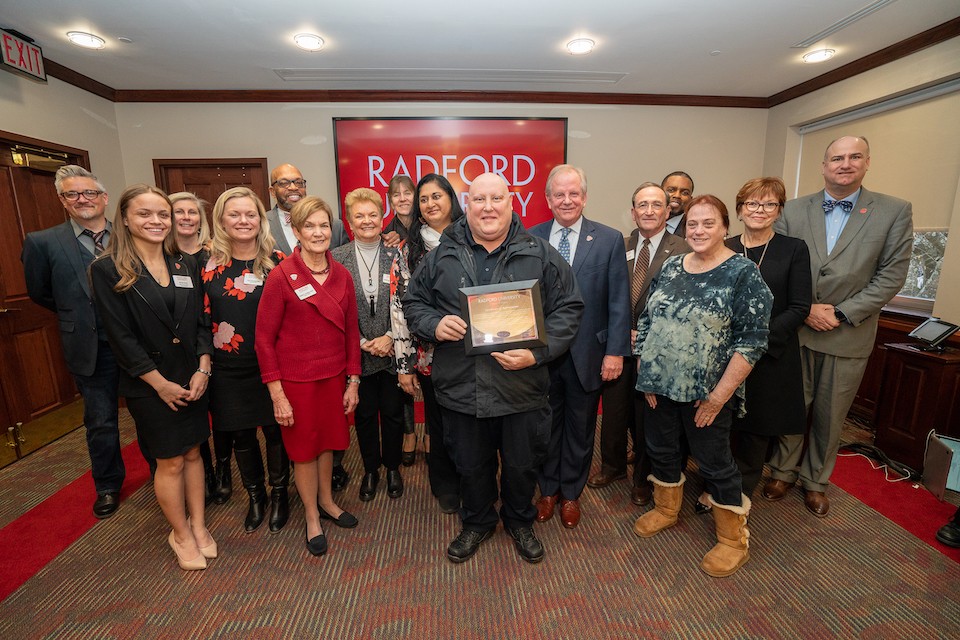 Bobby Hickman, center, was honored by the BOV for his outstanding service to Radford University.

In addition to the full BOV meeting, a variety of Committees met to discuss various initiatives, programs, and services.  At the Academic Excellence and Research Committee meeting, Interim Provost and Vice President for Academic Affairs Kenna Colley provided updates on several academic accomplishments, including faculty achievements and program advancements.

Radford University is the first public, four-year university to receive approval of an undergraduate degree program in cybersecurity. The program will start accepting students in fall 2019.

Colley announced the appointment of Assistant Provost for Global Education and Engagement Susana Carrillo. Carrillo previously served as the senior advisor to SENAI, a Brazilian workforce and skills development system, and at The World Bank from 2004 to 2017. She officially began her job at Radford on Dec. 10.

Faculty Representative to the Board Jake Fox announced the passage and adoption of the General Education Values Team, as well as the formation of the Ad Hoc Team for Civic Engagement.

Associate Professor of Geology Skip Watts presented on several projects he and other faculty members in the Geology Department have worked on regarding geohazards. Watts and his team often use UAVs, more commonly known as drones, to collect data and capture images to assess and prevent these hazards, including landslides, earthquakes, floods and sinkholes. Recent projects include Natural Bridge, the Smart Road in Blacksburg and a historic landslide that occurred at the airport in Charleston, West Virginia.

As part of the GeoHazards and Unmanned Systems Research Center at Radford University, Watts and his team train and teach current students to man UAVs and assist with ongoing projects. 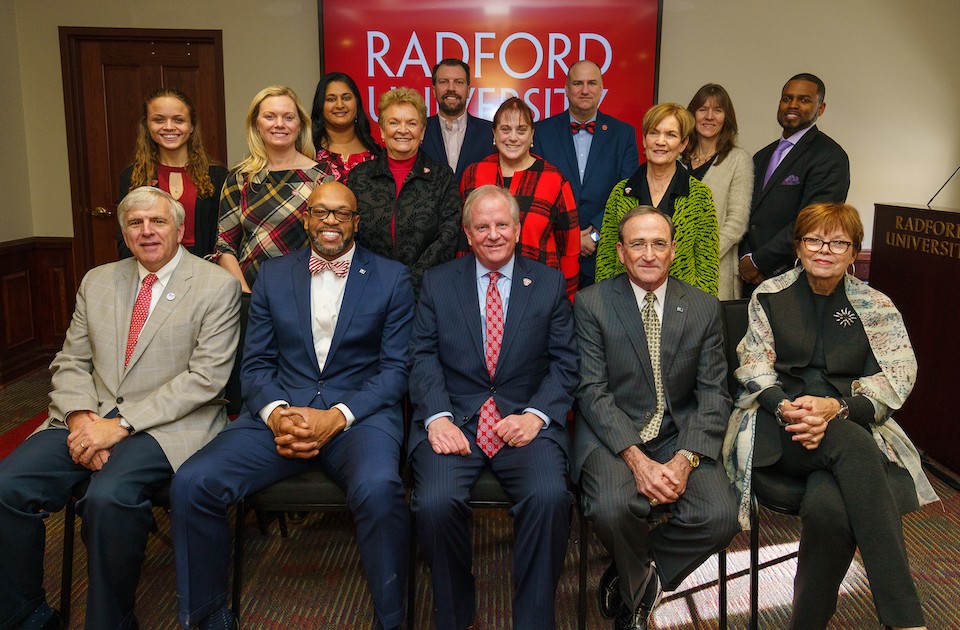 President Brian O. Hemphill, second from left, is pictured with the BOV.

At the Student Success Committee meeting, Student Government Association President Julianna Stanley reported on several initiatives the organization promoted during the fall semester, including support of those affected by the wildfires in California and the Thankful Tree, a new student appreciation project in which students wrote down what they were thankful for and scattered their notes on trees across campus.

The SGA is also working to promote engagement and awareness among Highlanders by:

Also, pertaining to student success and retention, Trageser announced that the Student Recreation and Wellness Center has received more than 56,000 visits this semester. Ninety-two percent of these visits were by freshmen. In addition, the number of university clubs and organizations has increased this fall semester from 270 to 301. Trageser also outlined two new programs offered by the Office of Diversity and Inclusion: Diversity2Go and Social Change Training.

The Business Affairs and Audit Committee (BAAC) was briefed on the University Auditor’s Report, ongoing capital projects, the Higher Education Trust Fund and the results of the Auditor of Public Accounts Higher Education Report.

University Auditor Margaret McManus reviewed a series of audits and subsequent recommendations, on the University Discretionary Fund, Quarterly Audit Review and the external annually mandated audit on which the University was found to be in full compliance.

The BAAC was briefed by Reed on the Higher Education Trust Fund by which the university purchases academic infrastructure equipment, such as computers, servers and other technology. Annually Radford receives an average of $1.6 million from the fund that is administered by General Assembly and the governor.

Reed also briefed the BAAC on the Auditor of Public Accounts’ Higher Education Comparative Report that found Radford to be a leader among its peers in financial stewardship and health. The report used 2015-17 data from financial statements from 14 Virginia colleges and universities to generate a series of ratios.

Reed shared that, in a Nov. 29, 2018 op-ed article, the Richmond Times-Dispatch highlighted that Radford had one of the report’s highest Viability Ratios and that Radford, along with the University of Virginia and Virginia Military Institute, have ironclad Viability Ratios, indicative of the capacity to service long-debt.  Radford’s score on the CFI Index, reflective of overall institutional financial well-being, was 2.90 and 3.0 is considered to be the benchmark of good institutional financial health. Among its seven peers in the master’s and baccalaureate class of Virginia colleges and universities, Radford’s 2.90 was the highest CFI Index rating. 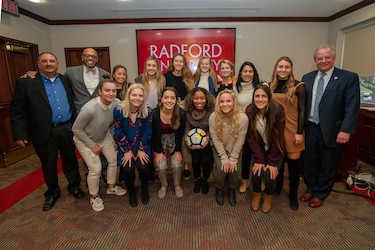 The women's soccer team was recognized for their outstanding achievement on and off the field.

Vice President for Enrollment Management Kitty McCarthy updated the UAUREMC on the application numbers for fall 2019:

Students from Northern Virginia, the Peninsula and Richmond were applying to Radford at a rate of 20 percent more than last year, and applications from international students were up almost threefold, from 40 in 2018 to nearly 120 this year. McCarthy said the academic profile of the new class remains constant, with admitted students having a 3.56 GPA and an average SAT test score of 1068.

The impact of Radford’s first-ever participation in the Common Application program was key, according to McCarthy, to the increased international interest in Radford. She detailed other measures taken to maximize Radford’s recruitment success such as:

2018 Homecoming weekend was a successful collaboration that stimulated alumni engagement, said Lowery. Among the Homecoming events were the unveiling of a popular Highlander sculpture at the corner of Russell Hall, the annual Golden Reunion Dinner and the Women of Radford Luncheon.

Lowery highlighted the results of some recent annual philanthropic initiatives:

After introducing Director of Creative Services and Marketing Services Lee Coburn and Director of Web Communication and Strategy Megan Williams Spraker, Schumaker shared web analytics data concerning the impact of the recent upset win by Radford over the University of Texas in basketball. Among the dividends from the spotlight experience were increases in traffic to various pages on the university’s home page, www.radford.edu, that ranged from 11 to 607 percent.

Schumaker screened an in house-produced, 30-second television spot for distribution in the Norfolk and Richmond markets that has been accompanied by out-of-home media and digital media throughout the state and beyond. Among the associated key performance indicators of the comprehensive advertising campaign, that began in October and will run through May 2019, in support of the university’s undergraduate recruitment and branding campaign are:

The Governance, Administration and Athletics Committee (GAAC) was briefed on advances and accomplishments in two areas: information technology and intercollegiate athletics.

Vice President for Information Technology and Chief Information Officer Danny Kemp updated the GAAC on his office’s current and future initiatives. Kemp spoke about expected completion times for such initiatives as IMPACT program technology enhancements and other initiatives moving forward into the fall 2019 semester. Those include work for the merger with Jefferson College of Health Sciences and Reed and Curie Hall renovations.

The Winter Celebration Men’s and Women’s Basketball Alumni Weekend is scheduled for Feb23, 2019.

The next BOV meeting is scheduled for Feb. 7-8, 2019 in the Mary Ann Jennings Hovis Memorial Board Room.