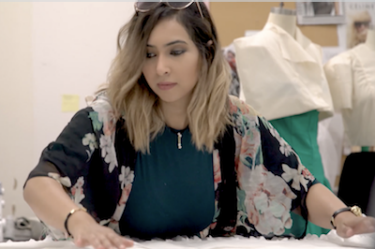 Senior Mashail Alghamdi came to Radford University with a passion for fashion and turned that passion into an achievement for the ages: becoming the first Radford student and the first designer from Saudi Arabia to be accepted at New York Fashion Week.

Alghamdi was accepted into the Haute Couture show, which consists of high-end fashion intricate designs on both the inside and outside of the garments.

“I’m looking forward to representing my country and Radford to the best of my ability,” Alghamdi said. “It’s an incredible honor to be the first Saudi designer and Highlander accepted into this show.”

Alghamdi found her way into the show on her own. As an intern with New York Fashion Week in 2017, Alghamdi worked with VIP customers and she led tours behind the scenes of Fashion Week, saw models before they went on the runway and met with designers. 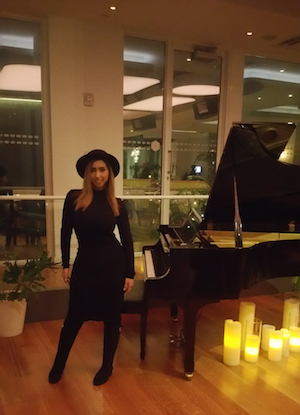 While an intern and a student, Alghamdi was trained by the former senior designer of Dior, Dolce & Gabbana, Givenchy, La Perla and the apprentice of the designer John Galliano – all high-end fashion designers. “I worked directly with the designer and some of my designs were approved for production,” she said.

During her internship, Alghamdi designed and created a look-book for the First Lady and a pillbox hat that was worn by a minister's wife during the 2017 Presidential inauguration.

“The concept of my brand is to empower women,” Alghamdi said. “I want my customer to be powerful, sophisticated and confident. When I give my pieces structure, it makes them unique and strong while exuding power and confidence.”

Alghamdi’s vision to become a high-end designer began back when she was a child styling her Barbies.

“I was always trying to make her dresses with hair ties, scarves or anything like that since I didn’t know how to sew,” Alghamdi said. “Watching runways on TV was a big thing during my childhood and I always loved to watch black and white movies to see their fashion which gave me the passion especially the structured dresses. I like being able to make something that looks like a dress, but at the same time has dimension to it. It’s like art to me, it’s more than fashion.”

I want to inspire people, especially women, to work on their dreams,” Alghamdi said. “I want all women to be inspired by what I did.

Even with having that passion from a young age, Alghamdi didn’t get a start into fashion until she came to Radford University after originally attending a business school.

“My family thought business school was the right thing for me to do and the right thing for my future,” Alghamdi said. “I went for three years and I was doing something that I didn’t like at all. I loved art and fashion, but I did not find a good fashion program back home. When I found out the Radford fashion design program is one of the best in the country, I was so happy to leave my major and come here.”

After changing her major to fashion design, Alghamdi discovered the feeling of what it was like to study in an area of interest. Alghamdi said going to class “is like a child going to Disney World.”

Alghamdi chose to do an independent study with Associate Professor of Design John Jacob in order to work closely with him and have him as a mentor.

A Passion for Fashion

“This is why I like Radford,” Alghamdi said. “It’s like a small community. You get attention from your professors. They know your name, your story. They are always there for me. It’s like family.”

Alghamdi credits her husband and two children in helping her through school, the design process and submission to New York Fashion Week.

The Buckingham Collection will be on display at 8 p.m. on Sept. 9 at the Crowne Plaza Times Square in New York City.