An algorithm that solves once unsolvable problems around us 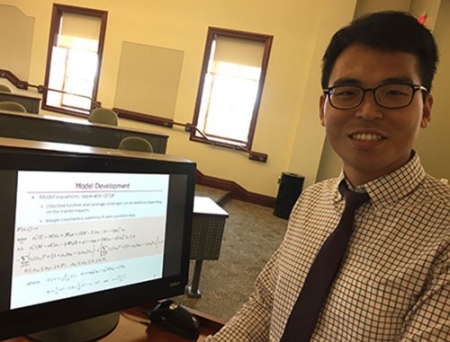 Jaehwan Jeong is a problem solver.

For the past three years, the Radford University assistant professor in the Department of Management has been working on problems that once were thought to be practically impossible to solve.

Now, Jeong has developed new algorithms that may someday lead to a more effective ways to sort through large data sets. “I hope my algorithm can contribute to make it easier, faster and better,” he said.

Solutions to the problems can include making better predictions and decisions in business and most fields where data analysis is needed. His algorithms can be employed as a fundamental building block to solve a regression model with a large number of independent variables and a small sample data. Conventional regression techniques typically fail to find a good model.

“These are just a few examples out of countless useful applications. If we can solve the problems more efficiently, our lives can be a lot different,” he said.

Jeong has published two papers on the subject in a top mathematical programming journal and has another submitted. In 2016, he and coauthor Chanaka Edirisinghe published “An efficient global algorithm for a class of indefinite separable quadratic programs,” and in the following year they published “Tight bonds on indefinite separable singly-constrained quadratic programs in linear-time.”

The algorithm in first paper finds an exact solution, “using a new approach, which was commonly believed to be impossible,” he said, and the second paper develops an algorithm for a more general problem.

“It does not guarantee an exact solution but very useful in big data analysis as its high precision is theoretically proved and practically demonstrated with hundreds of times faster speed than top commercial software such as IBM’s CPLEX,” Jeong said.

Both research articles were published in Mathematical Programming, a prestigious academic publication of the Mathematical Optimization Society that has high ranking in the Chartered Association of Business Schools (CABS).

Jeong and Edirisinghe have recently submitted a third research paper to Operations Research, a top-rank in all business journal ranking systems. It presents a new algorithm showing how Jeong’s second algorithm can be utilized to solve larger and more general problems, which often arise in big data analysis and business decision models.

Jeong, who has been teaching at Radford University since 2015, said he is sure his research will “contribute to not only academic theories but also our world for a better life by providing a method to solve once unsolvable problems around us.”