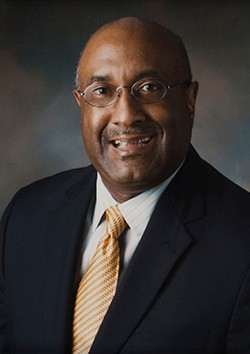 Radford University Professor of Political Science/Public Administration Reginald Shareef is moderating a panel for a Virginia Humanities (formerly the Virginia Foundation for the Humanities) program at 7 p.m. on Oct. 23 at the Jefferson Center in Roanoke.

The panel, titled “On the Beat: Local Journalism, Truth and Democracy,” features three award-winning authors: New York Times-bestselling author Beth Macy, Pulitzer prize-winning Eric Eyre and the Washington Post’s Monica Hesse. This program is part of the “Democracy and the Informed Citizen” initiative, administered by the Federation of State Humanities Councils (FSHC). The initiative seeks to deepen the public’s knowledge and appreciation of the vital connections between democracy, the humanities, journalism, and an informed citizenry. It is sponsored by the Andrew W. Mellon Foundation, the Pulitzer Prizes, and the FSHC.

“The panel discussion should attract many people from Southwest Virginia,” Shareef said. “I think that having it in Roanoke will draw a lot of people to hear these accomplished authors. Virginia is comprised of many different regions and having these important events in different parts of the Commonwealth – especially smaller cities and rural areas – is an important step in working toward solving various social issues.”

An issue being discussed in the Roanoke panel is the opioid epidemic in the United States. Shareef is “excited to be a part of the discussion” and hopes to help attendees better understand the origins of the epidemic in our region, the high socioeconomic costs and various treatment options.

“It allows me to be a part of a very timely discussion that will hopefully lead to public policy design/implementation,” Shareef said. “As moderator, I will have the opportunity to shape the discussion with all three panelists. Citizens need to better understand the causal relationship between economic decline and the opioid epidemic/violent crime - and their combined devastating effect on American society."

Macy’s work centers on community and social issues. Her book “Factory Man” chronicled Bassett Furniture Company and how John Bassett III fought to keep jobs and production in the United States. In “Truevine,” Macy chronicles the kidnapping of George and Willie Muse, who were exploited as circus freaks because of their albino skin. The novel includes an in-depth look at circus life in the 1920s.

Macy’s most recent work, “DOPESICK: Dealers, Doctors, and the Drug Company that Addicted America,” chronicles the opioid epidemic that is facing communities in America – from how it started to what is being done now. The book examines this issue through the lens of personal stories and advocates for a particular form of drug rehabilitation.

Hesse’s book “American Fire” explores the fiery world of two arsonists in Accomack County – who were fueled by love and economic depression. “American Fire” investigates what led to these fires and the meaning of life in a rural community in today’s global economy.

These authors will delve into discussions concerning economic downturn, the opioid epidemic, violent crime, policy ideas, the social stigma that stems from addiction and the role of local journalism in telling these truths.

“If you really want to mitigate addiction and crime during periods of economic decline, we need to think proactively,” Shareef said. “We need to think outside the box.”

For tickets to or information about the event, visit Virginia Center for the Book.