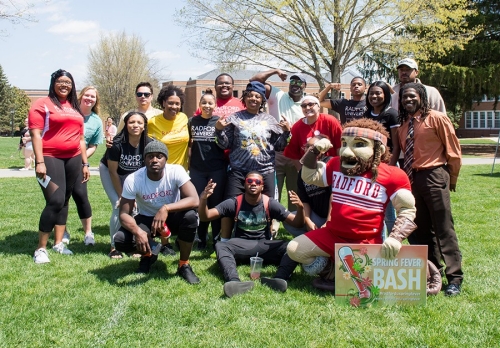 Radford University students, faculty and staff gathered together for the Spring Bash on Wednesday, April 18. (gallery)

“I love my university,” said Trumaine BeCoat Wade while making a donation at the Spring Fever Bash. “I am both a faculty member and a student, and I want to give back.” The inaugural celebration, held Wednesday, April 18 on Heth Lawn, featured games, drawings, free cookies, ice cream, lemonade, T-shirts, and – in the spirit of giving – a station where students, faculty, and staff could make their donations.

The event was the brainchild of University Advancement as a way to unite the Radford University campus during the annual week of giving. “We celebrate our week of giving by igniting a little friendly competition among the colleges – called Spring Fever – to see which one can garner the most supporters,” explained Brea MacBrien, director of annual giving. “The competition brings together the entire Highlander family – from students, faculty, alumni, parents and friends of the University – to raise funds to support our phenomenal students.

“Normally, Spring Fever is an online fundraising competition, but we decided this year we wanted to engage our campus community more directly in the fun,” MacBrien continued. “To that end, we planned the Spring Fever Bash!”

The Bash proved to be successful in its mission to engage the campus community as students, faculty, staff, police officers – even President Brian O. Hemphill – stopped by to check out the festivities. “Nearly 300 students and close to 50 faculty and staff members participated – and we received nearly 150 Spring Fever donations,” added MacBrien.

Each person had their own reason as to why they were at the event.

“I just wanted to stop by and see how everything was going,” said Officer Ian MacInnis while playing corn hole. “It’s always good to be out and talk with the students and be seen with the community.”

“I want to help my college win Spring Fever,” said Kaitlyn Owens, a freshman in the College of Humanities and Behavioral Sciences, while making her donation. Another freshman, Tristan Oskey, was also giving back. “I was feeling generous,” he said with a smirk.

“I believe it is always good to give back,” explained sophomore Elisha Nicholas. “As students, we can’t get anything if we don’t first give.”

No matter the person’s reason for being there or giving back, MacBrien said that she was pleased with the event’s turnout. “The event was a huge success. Just as the week of giving is intended to bring together the entire Highlander family near and far, the Bash was intended to bring together the Highlander family on campus. I’d say we accomplished that goal – as evidenced by students playing cornhole with police officers and faculty and staff mingling with students over ice cream and lemonade.”

MacBrien added that putting on an event the size of the Bash required its own level of participation and cooperation between distinct groups. “The planning process brought together many teams from across the University, including University Advancement, Dining Services, Admissions, Radford Athletics, Student Recreation and Wellness, Student Affairs, R-Space, University Relations, Facilities, student volunteers … the list goes on! The collaboration is a true reflection of the ‘one family attitude’ on campus and the success of the event would not have been possible without such strong partnerships.”

Spring Fever, which ended April 20, raised over $37,000 from nearly 1,000 unique donors, including just over $5,000 from seniors for their Highlander Senior Class Scholarship. The Spring Fever competition was won by the College of Humanities and Behavioral Sciences, which had 272 total donors. The College of Education and Human Development finished second with 192 supporters.

As for the future of the Bash, MacBrien is hopeful for a repeat next year, with some minor changes.