Student shines as inspiring advocate for those with disabilities 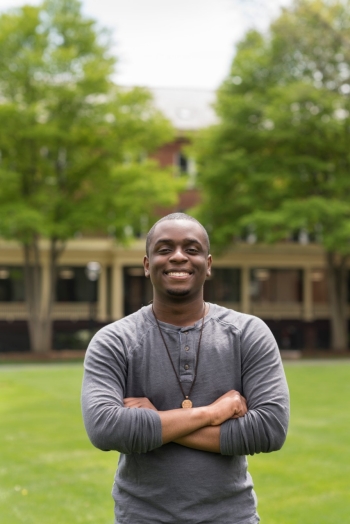 Junior Guy Smith is an inspiring advocate for those with disabilities. This semester, he organized and hosted the university's Autism Awareness Program.

Junior Guy Smith approached the Muse Banquet Hall podium coolly and confidently the evening of April 18 as all eyes focused on him.

Smith, of Roanoke, was the host and organizer of Radford University’s Autism Awareness Program, “Let’s Solve This.” He is also a Radford University student who not only identifies autism as his primary disability, but openly discloses his diagnosis in an effort to spread awareness and acceptance.

Public speaking is a great fear for many, no matter their level or lack of disability. Not, though, for Smith. He enthusiastically guided guests through an inspirational and educational program that featured keynote speaker Christina Giuliano, executive director of Blue Ridge Autism and Achievement Center (BRAAC).

“I enjoyed it,” Smith said. “I was a little nervous, but the more confident I get, the stronger I get.”

Smith was officially diagnosed with autism at age 10. It was at BRAAC where he learned to function in a social environment, a common challenge for those with disabilities. He practiced soft skills, such as eye contact, reciprocal conversation, proximity and pattern of speech. He excelled and is now mastering those skills daily on a college campus.

At Radford University, Smith is majoring in graphic design with hopes of one day working at a graphic design firm or in the music and theater industries. He is also a fierce advocate for those with disabilities.

“I educate people how autism affects an individual by sharing my story as an example,” Smith said. “I think it’s important because there are college students who have autism and other disabilities. Professors, faculty, staff and other students should know about their struggles and how to help them have a great college experience.”

Earlier this semester, Smith began organizing the second-annual autism program. That involved making connections with the university’s Center for Accessibility Services (CAS), Center for Diversity and Inclusion (CDI) and a local NAACP chapter, all while juggling a full course load and the social and cognitive challenges that come along with autism.

“Due to the underlying characteristics commonly associated with the autism diagnosis, being a student on a college campus can have its unique challenges,” explained Kate Daby, assistant director for CAS.

Daby, who came to the university in November 2017, has a passion for students with autism and has worked closely with Smith through the newly-developed Autism Mentors group since her arrival.

“Making those social connections and initiating and implementing events involves executive functioning skills, such as attending to details, organization, planning and staying focused on the task,” Daby continued. “These skills are what may heavily impact a student with autism.  Guy, however, has accepted this challenge and has risen multiple times on our campus by reaching out to partners and holding awareness events so that others can learn about him and advocate for his disability. I commend Guy for shining a light on his disability and how there are no boundaries.”

I educate people how autism affects an individual by sharing my story as an example."

Kate Daby (left) is the assistant director of the university's Center for Accessibility Services. She has worked closely with Guy Smith (right) through the newly-developed Autism Mentors group.

The Center for Accessibility Services, located on the third floor of Russell Hall, is committed to the ongoing goal of access and inclusion so that all individuals on campus can fully participate in the university experience.

CAS staff are allies to students, faculty and staff by aligning support, services and communication to provide equal educational opportunities. The center encourages accountability of students through promoting self-advocacy and independence.

Daby said advocating for those with disabilities is a continuous and very important effort of CAS.

Smith is not only making sure students with disabilities are remembered, but also proving that they, too, can shine. He’s done just that at Radford University and will continue to do so in anything he pursues, Daby said.

“He’ll move mountains one day,” she said. “We’re lucky to have him on this campus.”

Radford University recognizes Autism Awareness Week each year with a series of presentations and discussions to engage the entire campus community.

“The fountain is blue as a reminder to celebrate all abilities,” Klotz said. “As an inclusive and diverse campus, one ability or person is not more or less important than another. Today almost everyone is connected to someone with autism in some way, shape or form. We don’t necessarily need more awareness. We need more understanding and action.”