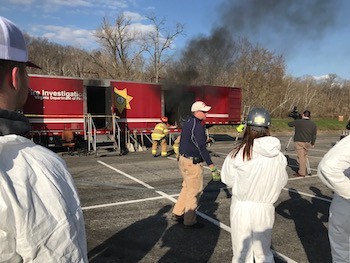 Todd Jones, center, talks to the class during the arson investigation exercise.

After the fire raged, criminal justice students entered the sooty aftermath to uncover what caused the blazing fire.

With protective gear on, 25 students participated in the final piece of the Fire and Arson Investigation class taught by adjunct instructor Todd Jones ’88 MS ’94 on April 10 in Lot Z at Radford University.

Jones, an investigator for the Virginia Farm Bureau, passed along skills used on the job to students, who, in groups of five, used the skills and theories to collect and handle evidence to identify the origin of the fire.

According to the Virginia Department of Fire Programs, its mobile burn trailer, with the schematics originally drawn on the back of a napkin, is one of two such units in the Commonwealth and one of three in the United States. Students utilized the training opportunity to practice investigating a fire in one of three burn cells, each independent from the other.

“It’s one of the best experiential learning devices because they are putting what they learned into the class into practice,” Jones said. “This is what public investigators do. This is the same trailer that students used to train public fire investigators and they are getting an opportunity to walk into the same burn cell.” 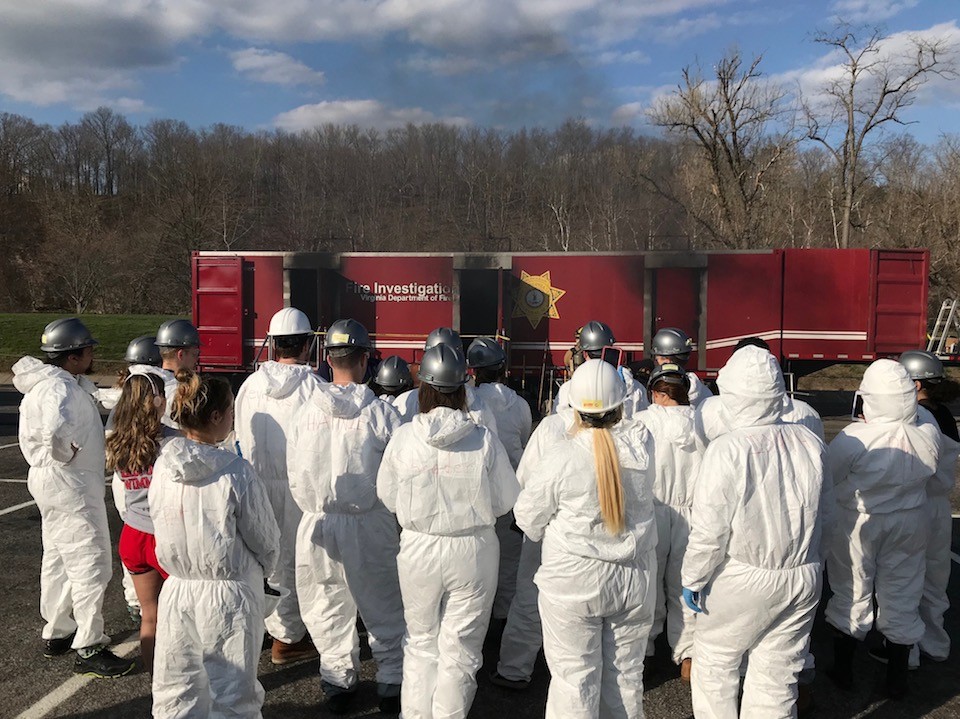 Students in the Fire and Arson Investigation class prepare to begin their investigations.

“They go in with a systematic approach and look for safety first,” he said. “They take their pictures, their diagrams and then start looking for heat sources. They’ll find the heat source that they think started the fire.”

Nickolas Brown from Roanoke said that they approached their burn cell – a living room setup – in a grid format.

“The whole room was burned,” Brown said. “One of the things we were taught was to divide the room into sections. We divided the room in half based on which side was more burned. We eliminated the side that was less burned as the point of origin. That’s what we’re looking for – where the fire actually started. We kept dividing the room until we found where the origin was.”

Firefighter puts out a fire in a burn cell

Brown’s group narrowed down the cause of the fire to two candles, one with the wick intact and the other with a burned wick. “It looks like the stool caught on fire and the candle fell from the stool down to ground and caught the couch on fire,” he said.

Brown said he had never been in that kind of environment before. “It’s almost like going into the upside down in ‘Stranger Things.’ It’s kind of the same – you can tell that there was stuff there and the structure is the same, but it’s just different,” he said.

The investigative skills used in the exercise translate to other careers in criminal justice, said Brown.

“Going step by step translates to any investigation, he said. “You always have to start somewhere. You have to look at the big picture and hone in on the causes while putting together the puzzle.”