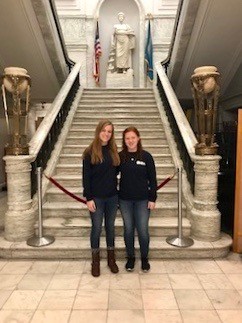 “Every single time there is something new,” Darrach said. “You get to broaden your skills from these kinds of events.”

Hannah Stewart of Charlotte, North Carolina, attended the conference for a second time, and said that the repeat experience allowed her to narrow her areas of focus.

“We like to do these things called roundtable discussions, so we were with other agencies around our area and about the same size,” Stewart said. “I was able to learn a lot and gain a lot of information from other people, such as how to assess your process and better it.”

Stewart said the last couple years RUEMS has attended the conference they attended education trainings, quality assurance trainings, and a seminar on how to run a collegiate agency and brought back the knowledge to increase RUEMS’ efficiency.

“It’s a learning experience for everyone that participates because we’re all kind of new to this because of our age,” she said. “You learn a lot and you’re able to take a lot home.”

While at the conference, Darrach was a part of the chiefs’ panel, which was comprised of all the EMS agency chiefs on college campuses.

One of the issues discussed at the conference was overdoses.

“You can’t treat all overdoses the same,” Stewart said. “They really broke it down to our level so we could understand it.”

Taylor Hawkins from Ocean City, Maryland said RUEMS members were able to use advanced dummies on which they could practice some of the response techniques taught at the conference.

“What we’re learning will all be applied in one way or another,” she said. “We saw the big picture and how what we are doing is the right track for us.”