A historical perspective on the Navajo Code Talkers 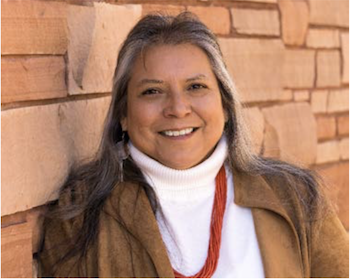 Radford University hosted Zonnie M. Gorman on April 13 at the Bonnie Hurlburt Auditorium for her lecture “Growing Up with Heroes: The Navajo Code Talkers of WWII. A Daughter’s Journey.”

Gorman is the daughter of one of the original 29 code talkers, Dr. Carl Gorman. Zonnie Gorman received her master’s degree from the University of New Mexico, where she is currently working toward her Ph.D.

Considered an expert on the Navajo code, she has lectured on the topic across the United States and Canada, including the NASA headquarters in Washington D.C.

The code talkers played a vital role to the United States Marine Corps in the Pacific theater of World War II by transmitting secret communications in a language that the Japanese could not decipher.

Gorman greeted the audience in the Navajo language, which she described as a Navajo tradition to establish a relationship with whom you are about to have a conversation.

She then explained the location of the Navajo tribe, which is located at the corners of Arizona, New Mexico and Utah. She gave an overview of her family’s history, showed old photographs of her ancestors and gave an overview of the United States’ policies on native peoples.

Carl Gorman was recruited to the pilot program following the Japanese attack on Pearl Harbor in December 1941. Gorman was the oldest recruit among the original 29 and lied to his recruiters about being younger to enlist, and Zonnie Gorman showed documentation of other recruits who were as young as 15 and lied about being older to enlist.

The minimum age of enlistment for the armed forces was 18, and the underage recruits had to be sure they had their stories straight for the recruiters who were sure to ask them numerous questions to confirm their age. While both Carl Gorman and the young recruits misled their recruiters, they did so in order to serve their country.

All 29 recruits finished basic training and were instructed to develop a code in their native language that would be received and translated back into English. They were instructed to include military terminology, countries, equipment, vehicles and other terminology. At the beginning of the program there were 29 code talkers who developed about 200 words, but by the war’s end, there were about 400 code talkers and 678 words in the code.

Gorman fondly recounted solving the mystery of the “30th code talker.” The generals who ordered the pilot program of code talkers asked for 30 recruits and the mysterious “30th code talker” never made it to the training program and was thought to have been lost to history.

While working on her master’s degree and studying at the National Archives in St. Louis, Gorman found a single document with the missing man’s name. Gorman says it was a highlight of her career to solve the old mystery and that it was rewarding to track down the man’s descendants and let them know the lost history of their grandfather.

For the basic alphabet, the code talkers took English words that started with the first letter to be represented and then translated it into a Navajo word. The letter A, or alpha, was associated with the English word ant and the Navajo translation of Wol-La-Che.

Some of the words did not have direct translations, usually for words that are associated with modern equipment. An example is a fighter plane, which had the code word of Da-He-Tih-Hi and a literal translation of hummingbird.