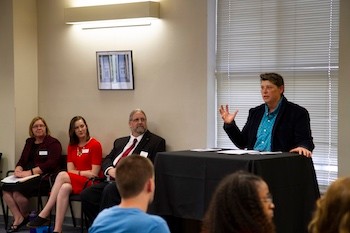 The 2018 winners of the Winesett Awards for Library Research were announced and honored in the Andrew W. Ross Student Art Gallery in McConnell Library on April 27.

Funded by the Hazel Grove Winesett Endowment and administered by the Radford University Foundation, the awards are made annually at the end of the spring semester to recognize the academic year’s most creative and original library research by undergraduate students.

Top prizes are granted to the students whose projects best illustrate the use of McConnell Library’s tools and available resources. 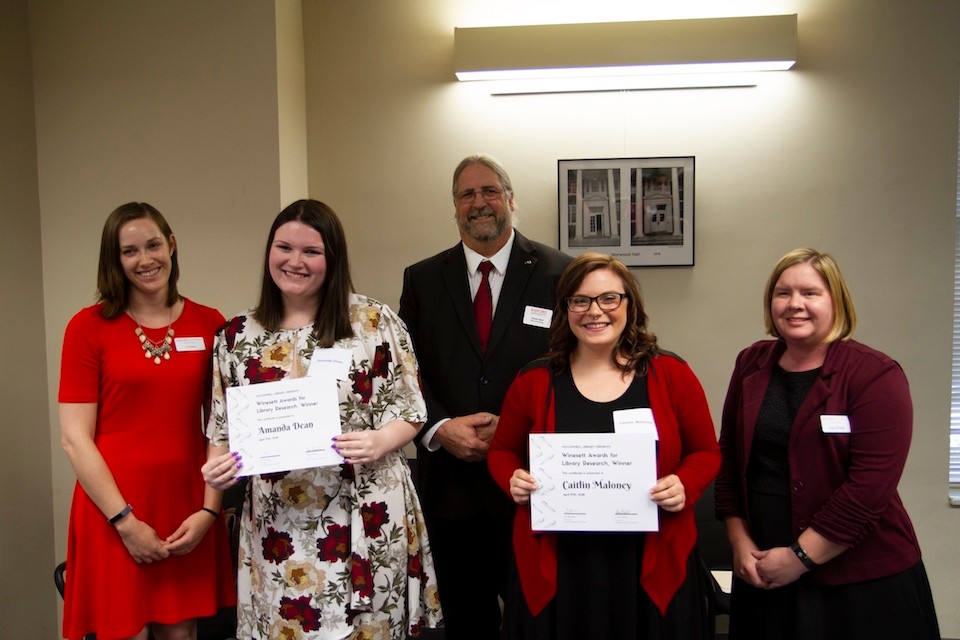 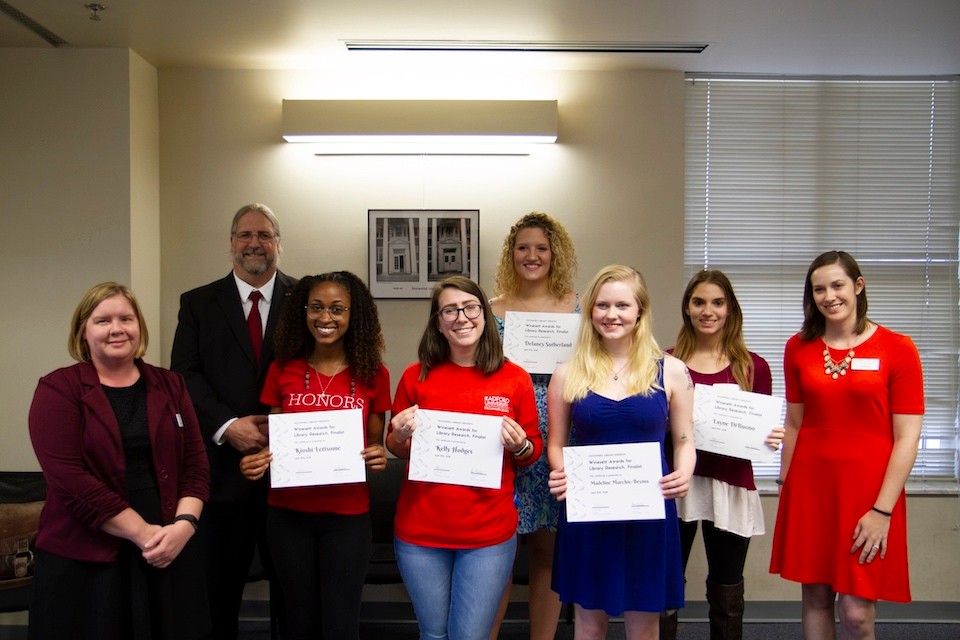 “The thing that we all know to be true is that you’ve achieved something special,” she said. “Your professors have seen what you’ve done this year as being worthy of recognition and as excellent examples of the enterprise of library research. We do it because we are committed to a better understanding of the world and to get closer to the truth.”

As a senior, Maloney from Wylliesburg said that the award was “a great way to say goodbye to Radford.”

“It’s an honor to represent the history department like this,” Maloney said. “It means so much to me. I didn’t think I was going to win – it was really exciting. I’m still shaking.”

Dean, of Pulaski, won the award as a freshman and said that this was her first big research paper.

“Dr. Ferrari was really confident in me,” Dean said. “I read a small passage in one of my textbooks about the opium war and it was very interesting to me that no one really talks about the conflict between Britain and China. It influenced relations in today’s society and I wanted to dive deeply into that.”

DiBuono from Ashburn, whose project was a web page account entry for the Lesser Flamingo, said the project took the entire year. “It means a lot to me because I put in a lot of hard work and effort,” DiBuono said.

The annual library research contest was named in honor of 1938 alumna Hazel Winesett, a lifelong educator from Pulaski who was remembered as a woman with a warm and modest heart who loved to travel. Upon her death in 2002, Winesett left the McConnell Library an $820,000 endowment, the largest such gift to-date that the library has received.

Her gift allowed the library to implement many projects, including the Winesett awards. In addition to the annual library research award contest, the Winesett endowment has been used to help fund numerous initiatives, such as expanding resources, upgrading furnishings and equipment and establishing the McConnell Library Archives and Special Collections' annual Winesett Book Collecting Contest.

Copies of this year's prize-winning papers will be permanently housed in the McConnell Library University Archives and can be digitally accessed online from the Winesett Awards for Library Research Collection Archives.