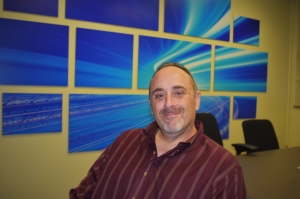 There was a nagging feeling in his mind and constant thoughts of whether he was on the right track to his career.

Steve Oake had been studying software engineering but knew deep down that he should be pursuing a different degree. There was a decision to be made, would he change direction or was he bound to his first decision?

“There was this haunting feeling that I was heading down the wrong path and I kept coming back to databases. It was not until I made the decision to change courses and make the commitment to working with data that I finally felt at ease,” Oake said.

As a non-traditional student at age 47, Oake started his academic career with computer networking at Danville Community College.

“My professor informed me that the university’s class sizes were smaller compared to a lot of other schools, the professors were friendly and helpful, and there were great employment opportunities within the field,” explained Oake.

After graduating with his associate degree in networking and computer programming, Oake transferred to Radford during the fall 2013 semester to obtain a Bachelor of Science degree in Computer Science and Technology while specializing in software engineering and database administration. He also earned a certificate in computer security.

Oake realized that database was his passion after taking a database class his first year at Radford, “This class challenged me. I could tell that the university not only wanted their students to progress through the database concentration but also to maintain a reputation of producing top-quality graduates in the profession.”

During his second semester, Oake discussed Radford’s Database and Information Management master’s program with Dr. Jeff Pittges who informed him that the DAIM program would provide a deeper understanding of how to properly handle and process data including big data, one of the newest and fastest growing fields in computer science.

While finishing the last year of his undergraduate degree, Oake started the DAIM accelerated program.

Oake indicated that Radford and the DAIM program offers a lot to students. Since attending the university on campus, he has been offered three positions within his field of interest. He also added that the hands-on experience and working with exotic databases are great aspects of the program.

Not only does Oake appreciate the experience that Radford has to offer, he also values the relationships he has developed with his professors and hopes to hold a full-time position at the university after finishing the program.

Oake stated, “All of my life, no matter which career I was in, I always felt that I had missed the glory days or worse, was reaching the end of that trade’s existence. I knew this was the right choice for me.”