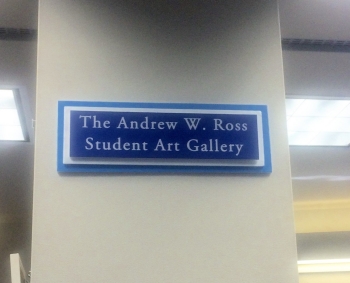 The name of an influential photography professor now rests on a wall in one of Radford University’s most iconic buildings: McConnell Library.

Library staff recently dedicated a wall space, located in the rear of the third floor of the library, to honor Assistant Professor Andrew Ross, who has been instrumental in turning the quaint study area into a prominent place for students to display their artwork.

The Andrew W. Ross Student Art Gallery was officially named during the summer by staff who have seen Ross help students matte, frame and finally, hang their work throughout the past several years. In addition to the behind-the-scenes work, he is also regularly present at the art receptions where he encourages his students to explain their pieces in front of guests.

“It’s been a great collaboration,” said Beth Johnson, head of Access Services & Student Engagement at McConnell Library. “Andrew has brought a lot of attention to the library. Going into an exhibit, he always has a unique vision of what he wants it to look like, and he brings that vision to life.”

Head of Reserves & Library Art Coordinator Jim Webster, who helps organize the library exhibits, called Ross a “catalyst” who has brought new life to the library. Several other professors, representing departments across campus, have expressed interest in the gallery space since Ross made it a staple showroom.

“He’s putting the library on the map as another venue for students to display their work,” Webster said. “Artwork doesn’t necessarily need to be hung in formal galleries. It’s important to see art as a part of everyday life, and that’s what Andrew is doing. He’s making art easily accessible and visible in the lives’ of our students.”

Ross said he was honored to receive such recognition and grateful to the library staff for the successful collaboration.

“Beth Johnson and Jim Webster have been a joy to work with in planning student exhibitions. They both have a great appreciation for the value of art in public spaces and the exposure that the library can give to students,” Ross said. “When they approached me with the idea of naming the gallery in my honor, I was a little embarrassed, but appreciative.  I hope that giving the exhibition space a true identity as a student gallery will help bring more awareness to the great art that our students create.”

Ross started at Radford University in fall 2014. He earned his Master of Fine Arts degree in Photography from Florida State University and his Bachelor of Arts degree in Philosophy from the University of North Carolina at Chapel Hill. As a graduate student at Florida State University, he helped develop exhibition opportunities for MFA students at various locations throughout the state. He also helped to procure funds for and create a graduate-student-run gallery for the university, which continues to operate in that capacity today in a new location.

Prior to graduate school, he was a member and eventual co-chair of the Chapel Hill Public Arts Commission in North Carolina. While working with this advisory board, he helped draft a percent-for-art ordinance for the city and also worked on a number of public art initiatives, including an arts festival, a yearly sculpture show, an annual Community Arts Project and regular public exhibitions in municipal buildings. He received a Village Pride Award in 2003 for his work promoting art in Chapel Hill.

The first display of the 2017-18 academic year is currently on display at The Andrew W. Ross Student Art Gallery, called “Mutualism” by MFA student Langley Anderson. The exhibit will be on display through Sept. 24. An opening reception will be held Sept. 12 at 3:30 p.m.