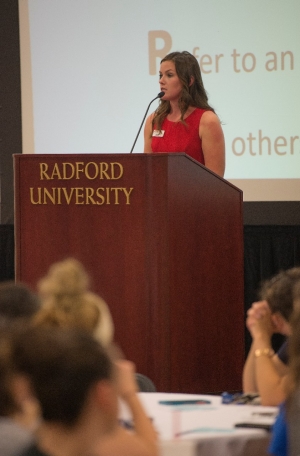 For the third consecutive year, the Radford University family united to support the global nonprofit organization Fear 2 Freedom (F2F) that brings hope and healing to those affected by sexual violence.

A record number of more than 500 students – representing several different clubs, organizations and sports teams - faculty, staff and community partners, gathered in the Student Recreation Center on Sept. 27 to prepare 460 After Care Kits to aid and comfort sexual assault survivors. The kits included clothing – which is often held after victims are examined – personal care items, a signature F2F stuffed bear and notes of encouragement, handwritten by participants.

After the kits were assembled, they were delivered to the Women’s Resource Center of the New River Valley. A group of about 150 students followed the kits to the center in a ceremonious walk to honor survivors. The kits will be divided between the Women’s Resource and Carilion New River Valley Medical centers to benefit survivors throughout the region.

F2F is a Virginia-based nonprofit organization established in 2011 by Rosemary Trible, the wife of former U.S. Senator and current Christopher Newport University President Paul Trible. The nonprofit is named after the startling statistic that every two minutes, someone is sexually assaulted. Four decades ago Trible tragically became part of that statistic when she was raped at gunpoint – the perpetrator never to be found.

On behalf of Trible and F2F, volunteers heard from F2F representative Amanda Link who thanked the Radford crowd and shared several statistics that shine light on the reality of sexual violence. According to Link, one in six women and one in 33 men in America will be a victim of sexual assault. One in five women have been sexually assaulted during their time in college.

“That is why you are here tonight,” Link said. “You are here to help restore hope and dignity for survivors of sexual assault.”

Link then aired a short video that featured several sexual assault survivors who shared their stories.

Spakes said she volunteered for F2F because she wanted to give back to her community.

“It’s so awesome to see so many people out here doing the same thing,” Spakes said. “I’m really proud of the Radford University community.” 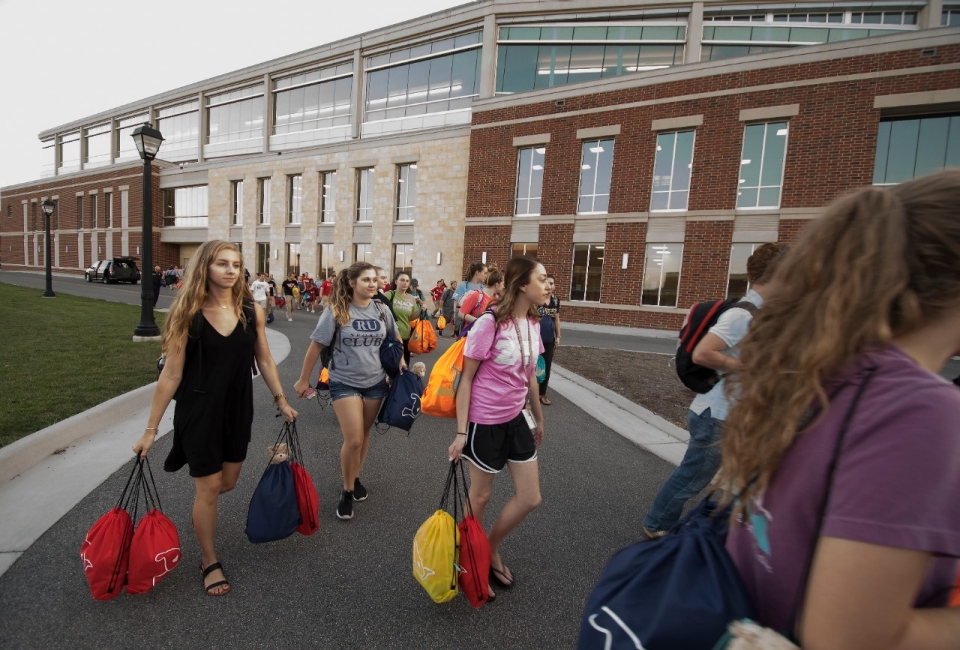 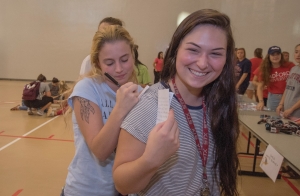 “Some of you might know someone who has been sexually assaulted,” Stanley said. “All I ask is that you get your friend the support they need. We will always be here to support them.”

Women’s Resource Center of the NRV Director Pat Brown shared information about the off-campus resource. The center serves about 4,000 people a year from the New River Valley and provides support for Radford University students, including a free and confidential 24/7 hotline, shelter, counseling and emergency advocates.

“We are all about creating a future community that is free of sexual assault and domestic violence, and that starts right here,” Brown told F2F volunteers. “Your commitment can make that happen.”

Cade Gray of Gate City was amongst the hundreds of students who helped prepare the After Care Kits. Gray was joined by his teammates, members of the university’s Ultimate Frisbee club.

“We’re a small group, but tonight, we’re part of a much greater cause,” Gray said.

“And we are aware that sexual assault affects both females and males,” Gray explained. “By volunteering with Fear 2 Freedom, we’re showing that we are all united in this cause.”

SAVES Director Kelly Rubin said she was very pleased to see so many students, faculty, staff and community partners participate.

“My favorite part of the evening was watching the students take time to write a message of hope and encouragement to place inside the kit they prepared,” she said.