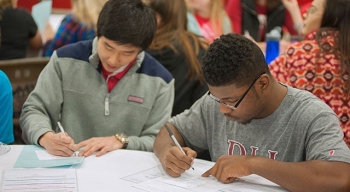 Radford University is partnering for the third consecutive year with the global nonprofit organization Fear 2 Freedom to raise awareness of sexual assault and benefit victims throughout the New River Valley.

On Wednesday, Sept. 27, Radford University’s Substance Abuse and Violence Education Support (SAVES) and Student Life, with support of the Student Government Association (SGA) and Women’s Resource Center, are co-sponsoring a Fear 2 Freedom Celebration event on campus. Students, faculty, staff and community members will assemble hundreds of recovery kits to be distributed at the Carilion New River Valley Medical Center and the Women's Resource Center in Radford. The kits will include clothing – which is often kept as evidence after victims are examined - basic toiletries and notes of encouragement.

Fear to Freedom, F2F, is a 501(c)(3) nonprofit founded in 2011 by Rosemary Trible, wife of Christopher Newport University President and former U.S. Senator and Congressman Paul Trible. Rosemary Trible, a survivor of sexual assault, wrote a book titled "Fear to Freedom," in which she accounts her journey to freedom from this tragic experience through forgiveness and sharing her story with others. F2F's mission is to redeem and restore those wounded by sexual assault, bring them hope and healing and change the cultural understanding of this issue by empowering and educating college students.

The Sept. 27 Radford University F2F event will be held in the Student Recreation and Wellness Center MAC Court, beginning at 6 p.m. When assembled, some of the kits will be loaded onto an ambulance and delivered to the Carilion Clinic. The rest will be carried in a candlelight vigil to the Women's Resource Center in Radford in recognition of sexual assault victims.