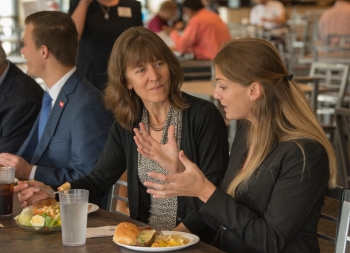 BOV member Debra McMahon dines with a student during lunch at Dalton Hall on Sept. 7.

The BOV was briefed on the university’s increases in enrollment, retention, academic profile and residence hall occupancy for fall 2017. Highlights included:

President Hemphill reported to the board about a special ceremony on Aug. 19 that honored Joseph P. Scartelli, former dean of the College of Visual and Performing Arts and provost emeritus, who retired from the university July 1. At the event, students, faculty, staff, alumni and friends gathered in the atrium of the Covington Center to unveil and dedicate the Joseph P. Scartelli Atrium.

President Hemphill also updated the board on proposed changes to spring commencement 2018. These changes include holding one commencement ceremony on Moffett Lawn at which each graduate’s name will be called and degrees will be conferred.

Faculty Senate President Jake Fox briefed the BOV on several areas of focus for the Faculty Senate, including advocacy of faculty resource issues – teaching workload, salary compression and retirement and retirement transition; ensuring that Radford’s core curriculum remains current with the latest SCHEV guidelines and working with the provost to review and update the faculty handbook. 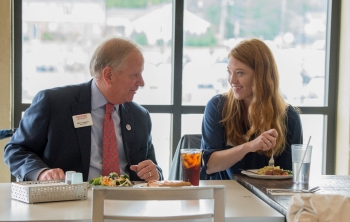 BOV rector Mark Lawrence chats with a student at Dalton Hall on Sept. 7.

In addition, the UAUREMC learned that alumni chapters have been re-established across the Commonwealth, as well as two in North Carolina and one in Atlanta. Radford University has also established an alumni board for the first time in more than a decade.

The Business Affairs and Audit Committee (BAAC) was briefed on the university’s Financial Performance Report for fiscal year 2016-17, which ended June 30, 2017.

The BAAC committee was also updated on the write off of past due accounts in fiscal year 2016-17 and current campus capital projects, including the renovation of the Reed and Curie Halls science buildings.

In addition, Graham Glynn was introduced as the university’s new provost and vice president for Academic Affairs.

Glynn recapped for the AAC some of the highlights of his introduction to the university. He cited Radford’s embrace and incorporation of high impact practices, which deepen student engagement, the evolving focus of the Career Services operation toward engaging students early in their time at Radford and the success of its programs in education, health care, cybersecurity and criminal justice. He also identified several opportunities for growth, including expansion of the online program offerings, providing the Radford educational experience internationally and leveraging summer school opportunities.

The Student Affairs Committee (SAC) heard from Civic Engagement and Community Service leaders who provided an overview of the university’s 2016-17 community service efforts: 2,221 unique students and 124 student organizations participated in 276 unique service events, resulting in a total of 30,926 community service hours. The SAC was also briefed on planned 2017-18 community service projects, including several fundraisers for those affected by hurricanes Harvey and Irma, as well as the Fear 2 Freedom sexual assault awareness event and the Radford Gives Back canned food drive.

As part of the SAC meeting, the Student Government Association (SGA) outlined its 2017-18 strategic plan initiatives:

The SAC was also briefed on the restructuring of Student Life. The Center for Diversity and Inclusion (CDI), which formerly reported to the Dean of Students office, is now a department within Student Life. Student Counseling Services (SCS) is now an in-house counseling services operated and staffed by the university. The transition will allow for the expansion of services and more outreach opportunities for SCS staff, previously contracted through a private health care system.

The Governance, Administration and Athletics Committee (GAAC) received a briefing on strategies to protect university data and systems from cyberattacks. The director of athletics provided an update on resource development, updates to NCAA required days off for athletes, facilities and branding.

The next BOV meeting is scheduled for Dec. 7-8 at Radford University. 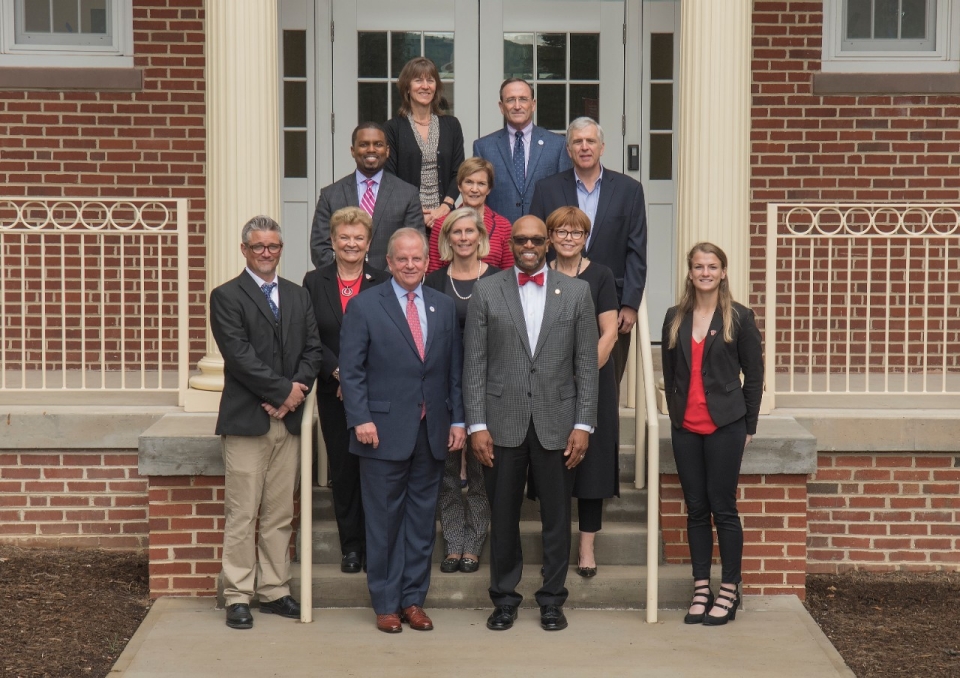 The Radford University Board of Visitors