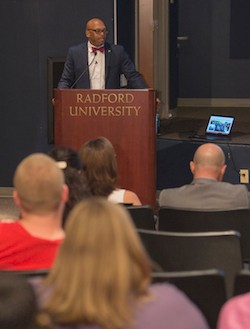 The 2016-17 academic year kicked off with the Budget Planning Summit on Sept. 9, 2016. Members of the Radford University family came together and engaged in conversation about the university’s economic forecast and the university’s budget while focusing on specific areas: innovation, efficiencies, revenue generation and economic development.

Radford University hosted Homecoming on the weekend of Oct. 14-16, 2016. During the weekend, numerous events were hosted, including Family Weekend, the Women of Radford luncheon and an alumni lacrosse game.

“Another milestone moment for us was when we came together as One Radford Family on Nov. 11, 2016,” President Hemphill said. “We, as faculty, staff and students, came together to have a campus-wide conversation following the election. We had meaningful conversations about expectations of civility, unity and respect.”

Another highlight of the past year included Highlander Pride weekend, April 27-29, 2017, which featured the Red and White Gala, a golf tournament, the Highlander Half Marathon and Highlander 8K.

Radford University hosted Virginia Gov. Terry McAuliffe and other state dignitaries for the announcement of an accelerated academic program and new delivery platform on Sept. 8 called Innovative Mobile Personalized Accelerated Competency Training, or IMPACT. The new program focuses on cybersecurity in year one and geospatial intelligence and counseling with a focus on opiates in year two.

“We will be the first four-year public institution in the Commonwealth to launch a competency-based education program,” President Hemphill said. “I think that we will very quickly develop into a national leader.”

A total of 180 people worked together through a task force and nine sub-groups to develop Radford University’s upcoming strategic plan, which will be taken to the Board of Visitors in September and for approval in December. Implementation is proposed to start in January 2018.

Some of the updates to the strategic plan include a new mission statement, a new vision and updated core values. 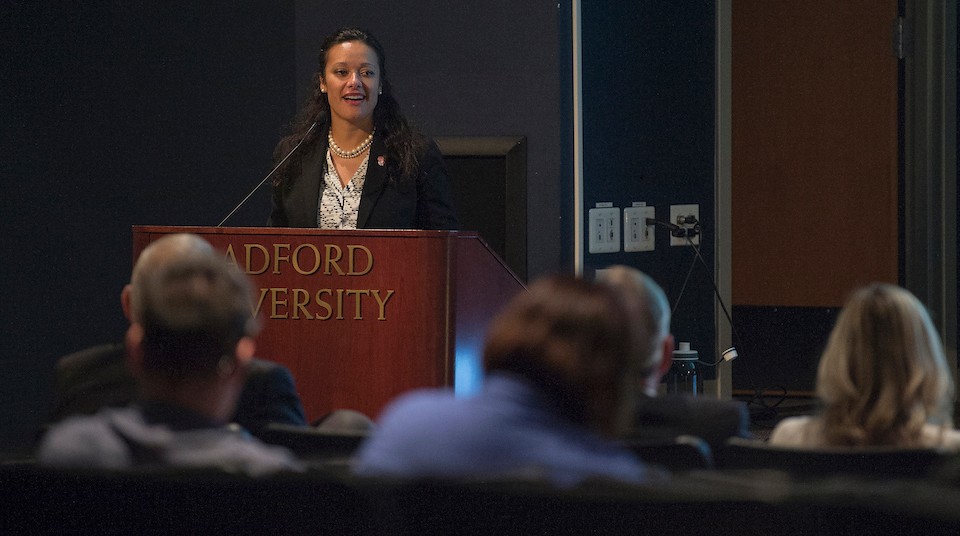 Lowery discussed Radford University’s upcoming fundraising campaign with the students, which includes four areas of investments, which are academic excellence, student success and engagement, capital infrastructure and improvements, and experiential learning and innovation.

“We are going to have a comprehensive campaign – every portion of the campus community will be touched,” Lowery said. “We have to have a campaign that makes Radford unique. As students, we need your voice. We need you to be a part of this process.”

Students discussed the potential of the campaign reaching and impacting undergraduate research, RARE and student organizations. Students who would like to submit suggestions or feedback about the upcoming fundraising campaign may contact University Advancement directly at ruadvancement@radford.edu or www.radford.edu/campaign-survey.

During the question-and-answer segment of the forum, President Hemphill and university administrators provided answers and feedback to questions and concerns pertaining to online education, LGBTQ services, direct donations to student or faculty research projects, adding additional research opportunities at the undergraduate and graduate level, among other student issues.

Sophomore Colleen McNickle, of Sterling, Virginia, said she values the openness and accessibility of President Hemphill.

Student Government Association President Julianna Stanley is “thankful that we have a president that is intentional in the work that he does for our university.”

“It is apparent that he truly cares about the students,” she said. “The open forums give students an avenue to express their concerns and make them feel like valued members of the Highlander community. I am very proud to be a Highlander.”