The skirl of bagpipes and drums echoes through the NRV 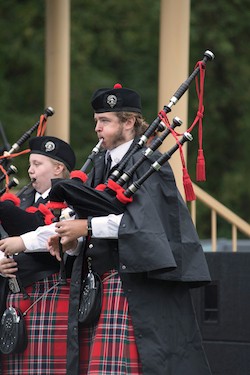 The Radford University Pipes and Drums Band performing at the 2016 Highlanders Festival.

The skirl of bagpipes and drums rings through the valley, emanating from the Radford Highlanders Festival on Oct. 21 at Bisset Park in Radford, Virginia.

The tradition of having the Radford University Pipes and Drums Band, a volunteer effort, is an ongoing effort headed by College of Visual and Performing Arts Professor Tim Channell. The band is comprised entirely of Radford University students.

In the past, Radford University had a full marching band, which also had participated in the Macy’s Thanksgiving Day Parade. About five years ago, there was a push on campus to bring back the pipe and drum band for ceremonial use. Since that push, the campus-wide effort helmed by Channell has maintained six to eight pipers and three to five drummers each year.

“Every year, I look forward to opportunities for the band to demonstrate their playing abilities. They are very good players,” Channell said. “Showcasing our students and being a good representative of Radford University is important to us. We enjoy putting Radford’s name out there and continuing the tradition of excellence.”

The band, open to all students across campus, participates in the Highlanders Festival. The band will present a short concert beginning around 9:20 a.m. and will participate in the mass band and parade of clans following the completion of the 20-minute set.

In the five years that Channell has been involved with the Highlanders Festival, he’s made the experience for the Radford Pipe and Drum band a memorable one for the participants. Typically, the students don’t have any prior experience with the instruments prior to joining the band.

In the experience, students are able to learn the traditions of piping and classic pipe and drum tunes, but are “also able to take that experience and participate in a community organization or other community pipe bands,” Channell said.

“The students do this all on a volunteer basis; they don’t get academic credit for it,” Channell continued. “The band is called to perform for five to six ceremonial events at Radford University each year. Students are often called upon to do other events throughout the region, such as weddings and other events on campus.”

Preparation for these events takes time – to the tune of four or more hours per week upon mastery. But getting to that point can take upwards of six months to learn how to play the pipes, Channell said. 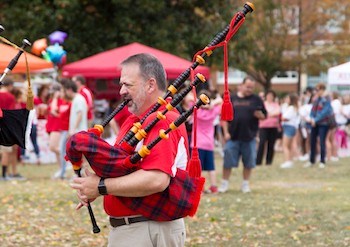 “When I started – and I was a musician – I thought that it was just a few notes and that I’d be able to easily pick it up. It takes time,” he said. “It’s a very different instrument, unlike what most people have previously played. It’s a lot of fun to play, especially in a band setting.”

This year, students joining the Pipe and Drum Band bring an unprecedented amount of experience.

“It helps us approach our pipe band in a different way,” Channell said. “We’re hoping to participate in some pipe band competitions now and expand playing opportunities for the band within the community and beyond.”

In addition to playing at the Radford Highlanders Festival, the Pipe and Drum Band will play an on-campus event at 7:30 p.m. Nov. 30 in the Performance Hall in the Covington Center.