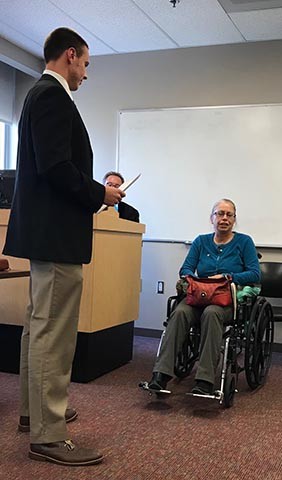 DPT graduate student Andy Smith, in his role as attorney for the defense, cross-examines DPT Director of Clinical Education Renee Huth, who was appearing as a plaintiff injured in a fall while rehabbing.

The second-year DPT graduate students became prosecutors, defendants and legal researchers in a mock trial to understand liability and legal procedure as well as their profession’s need for proper documentation and communication.

A 13-person prosecutorial team and a 17-person defense team gleaned depositions from all parties involved for omissions in record keeping, procedural mistakes and breakdowns in communication.

One team of prosecutors, Alana Dudek and David Furrow, faced off with another defense team of Julianne Bal and Andy Smith. They presented and disputed facts of the case in opening and closing statements and cross-examinations of witnesses before a jury.

As judge, Yost ruled on points of evidence and maintained courtroom protocol. 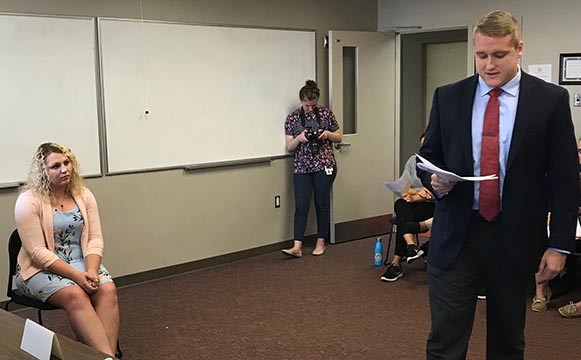 Furrow got a unique perspective of – and appreciation for – his profession, as he challenged the work done by a fictional professional colleague.

“The DPT on the stand could be me. It makes you think about what one slip-up can mean.” Furrow said.

The DPT on the stand for the case was played by Maegan Herwald.

“It was so stressful,” Herwald said of her time on the stand. “And scary to think I could be so vulnerable.”

Kolb said the exercise was designed to demonstrate a worst-case scenario for the aspiring DPT’s who will supervise – and held responsible – for PTA’s who work with clients or patients.

“The big picture of this exercise is to show the level of risk to which they are exposed as practitioners, as well as the importance of documentation and regular reassessment of their patients,” Kolb said.

The jury, composed of PTA students from the Jefferson College of Health Sciences (JCHS), found the plaintiff, a company employing the DPT, not guilty. In the post-case debriefing, they pointed out that had the suit been brought against the DPT, played by Herwald, not the company, a guilty verdict would have been likely. 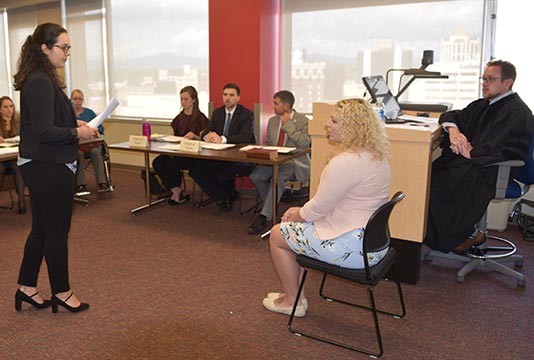 “It was tough to watch a colleague being questioned. The prosecutors did not relent,” Bal said. “To be a safe clinician, crossing the T’s and dotting the I’s is so important.”

Kolb said the exercise was designed to incorporate the law, the American Physical Therapy Association code of ethics and the latest physical therapy training to develop the students’ clinical reasoning skills. He said it also tested the students’ verbal and written communication skills.

“I think the students now have a clear idea of just how much risk they are under in today’s health care setting and are better prepared to protect themselves,” said Kolb.

While loosening his tie after the session, Furrow reflected on his career choice.

“I am glad I choose PT school, not law school,” Furrow said.