President engages with parents during Homecoming and Family Weekend 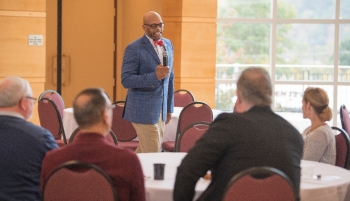 President Brian O. Hemphill engages with parents at the Conversation with the President event on Oct. 7.

Proud parents attended the Oct. 7 Conversation with the President filled with optimism about their students’ progress and the direction of the university.

Hemphill hosted the breakfast event for parents and family members who were visiting campus for Homecoming and Family Weekend. Several university administrators, faculty and staff were also in attendance to help answer questions and provide assistance.

Hemphill said he felt positive about the progress the university is making, especially the transformation of the university’s overall reputation. He cited the latest U.S News & World Report College Rankings in which Radford University advanced to No. 15 in its listing of the Top Public Schools in the South and to No. 43 on its Best Regional Universities (South) list.

“There’s a lot of momentum,” Hemphill said. “We continue to move up in the charts.”

“Everyone here is pulling in the same direction, Hemphill said. “You’ve made a very good decision with your sons and daughters attending Radford University.” 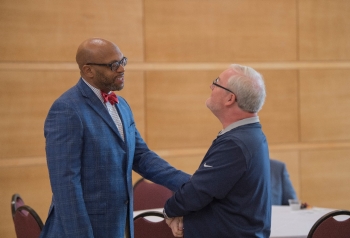 President Hemphill visits with parent Mark Yost, father of RU sophomore, Kasey. Kasey has "fallen in love" with the university, her father said.

Parent Robin Smith, of Washington D.C., said she has seen tremendous transformation in her son, Elliott, who is on track to graduate this winter. Elliott has made the dean’s list and is the co-founder of the university’s Model United Nations Club, among the many accomplishments his mother listed.

“He just loves his professors,” she added.

Beyond his academic achievements, “Elliott has also grown into a fine young man,” Robin Smith continued.

“I am very impressed with your vision, your mission and the growth that the university has undergone,” Smith told President Hemphill.

Smith said she had also visited the university’s Center for Diversity and Inclusion (CDI) and was impressed with the facility and its staff.

“They were very engaged and very on top of things,” Smith said.

Rick and Pam Mason, of Midlothian, said their daughter, Courtney, is adjusting well in her first year at Radford. A freshman English major and pre-law minor, Courtney has already taken advantage of some of the university’s more than 270 student organizations. She’s currently a member of Cru, a faith-based organization, and is busy exploring other clubs to join.

Rick Mason said he encouraged Courtney to attend Radford, noting that his cousin, an alumnus, earned a degree in geospatial science and is enjoying a successful career because of his Radford University education.

“She’s made the right choice and we are looking forward to supporting her on this journey,” Mason said.

Mark Yost’s daughter, sophomore nutrition and dietetics major, Kasey, has “fallen in love with the school,” he said.

The family lives in Morgantown, West Virginia, and Mark Yost said he encouraged Kasey to find a smaller, more intimate school to attend than the larger universities surrounding their hometown.

“It has been a great experience so far,” Yost said.