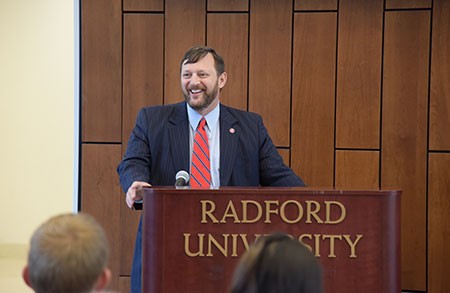 Radford University’s College of Humanities and Behavioral Sciences (CHBS) presented its annual Distinguished Alumni Award to an alumnus who served more than 30 years home and abroad as an FBI agent.

CHBS Dean Katherine Hawkins conferred the honor to Rick Schwein ’83 at the college’s annual alumni and family reception Oct. 6 in the CHBS Building.

"For over three decades, Rick Schwein has put himself in harm's way in defense of freedom around the world and also to protect our safety and security here at home,” Hawkins said. “It's a tremendous honor for our college to be able to claim Rick as one of our own. He's an exemplary recipient of our college's Distinguished Alumni Award."

Schwein graduated from Radford University in 1983 with a bachelor’s degree in political science. He served in the U.S. Army from 1983-88, where he was a military intelligence officer and participated in highly classified counterterrorism missions in the Middle East.

He began working for the FBI in 1988 as a special agent and served the bureau through 2014 in various capacities, including special agent operations supervisor in Baghdad, representative for the U.S. Special Operations Command of the Senior Counterterrorism Division and a legal attaché to the U.S. embassies in Yemen, Ethiopia, Eritrea and Djibouti.

Schwein was FBI Agent in Charge for the Birmingham, Alabama Division, where he led all bureau activities, investigations, personnel, resources and programs. He was responsible for a 230-person workforce at five physical locations and a discretionary budget in excess of $2.2 million. Schwein retired from federal service in 2014.

Throughout his FBI career, Schwein received several prestigious awards, including the bureau’s Medal of Valor and the Director’s Award for Outstanding Counterterrorism Investigation. Schwein also has been recognized by the U.S. Department of State with the Meritorious Honor Award.

After retiring from the FBI, Schwein became director of the Department of Safety and Security at Mars Hill University in North Carolina, where he planned and developed policy, standards, procedures, training and emergency plans for the university. In August 2016, Schwein formed Global Solutions, which provides expertise in risk management, safety and security.

“None of the successes I enjoyed professionally would have occurred without the support that Radford University gave me,” Schwein said as he accepted the award. “I think you’ll hear that repeated with a lot of alumni that you encounter. Certainly, I’ve heard it from many of my peers.”