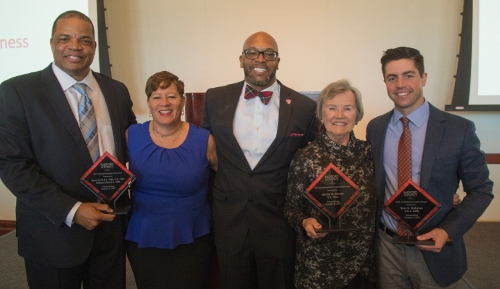 “You don’t have to be Goliath – you can be David, as long as you are smart with your rocks,” wrote Marty Smith ’98 in a prepared statement read by Executive Director of Alumni Relations Laura Turk ’87, M.S. ’90. “Radford University taught me how to be smart with my rocks.”

The ESPN journalist and television host was one of four honorees at the 2017 Alumni Volunteer Leadership Business Lunch and Awards Ceremony, held Friday, Oct. 6 in Kyle Hall. The event – which hosted over 100 alumni, family and friends of Radford University – honored those alumni who have made an impact in their professions, community and their alma mater.

Smith received the Outstanding Alumnus Award, which recognizes a graduate who has made remarkable contributions to society through his or her profession. Unable to attend the ceremony due to an assignment in College Station, Texas, Smith sent his regards via Turk. “It pains me to miss this event,” he wrote. “Nowhere on Earth can you find a sweeter October breeze than the New River Valley.”

The Giles County native began his sports journalism career as a student, working in the Radford University sports information office. Smith had stops at the Roanoke Times, Washington Post, Lynchburg News and Advance and NASCAR.com before arriving at ESPN in 2006. Today, he hosts “SportsCenter Presents: Marty Smith’s America” on the sports network.

“I love Radford University, and I'm so proud to represent the administration, alumni – and most importantly, the students – every single day,” Smith continued. “It's humbling to be considered a notable alumnus, as I know so many Radford alumni who accrue fascinating achievements professionally every single day. I'm so honored and so thankful for each of you and your contributions.

“Thank you for considering mine.” 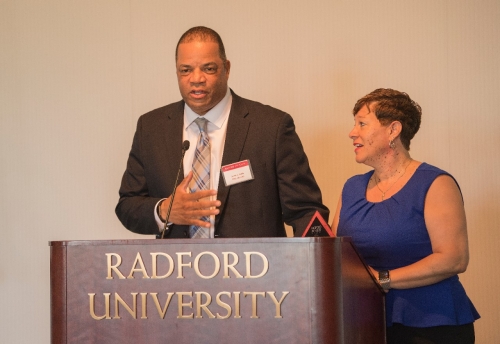 “Radford University has given us a million times what we could ever give back,” said David Smith ’85, M.S. ’87. He and his wife, Pebbles ’85, were honored with the Outstanding Service Award, which recognizes graduates who have made exceptional contributions to furthering the mission of Radford University through continued support of their community and the University.

Both David and Pebbles, who met as students in 1981, were outstanding basketball players for the University. In 1995, David was part of the inaugural class of inductees into the Radford Athletics Hall of Fame.

Pebbles serves on the Roanoke executive committee for Relay for Life, as well as serving in various leadership roles for Big Brothers, Big Sisters and Junior Achievement, while David currently serves on the Radford University Athletic Foundation Board of Directors. Both are very active in the Radford University alumni community, and they rarely miss a men’s or women’s basketball game.

“When Pebbles and I received the call that we were going to receive this award, I didn’t realize that we had done enough to warrant such an honor,” David continued. “That is the beauty of it. We just did what we thought was right.

“We just love this place.”

Sean Gallahan ’08 received the Outstanding Young Alumni Award, which is given to an alumnus 35-or-under who has made significant career achievements and has been actively involved in Radford University programs or civic and volunteer activities.

As a finance student, Gallahan was a member of Beta Gamma Sigma, the Financial Management Association and Delta Sigma Pi, all of which are leadership and academic organizations open to College of Business students. He also held an internship at Cassaday and Company, a nationally recognized investment firm founded by fellow Highlander Stephan Cassaday ’76.

“The day I met Sean at Radford University, I had spoken to over 200 students, and he was the only one who approached me and said ‘I want to work for you,’” said Cassaday. Gallahan is now a first vice president at the firm, overseeing approximately $130 million in assets for his clients.

“I am honored and proud of this accomplishment,” said Gallahan. “No one does anything alone. We have seven other Radford University graduates at Cassaday and Company. I had a lot of help along the way.”

Gallahan has been recognized as a “Top 40 under 40” in Loudon County and serves as a wish granter for the Make-A-Wish Foundation mid-Atlantic chapter, providing trips to France, Germany, Hawaii as well as a Tysons Corner Center shopping spree. He also serves on the board of trustees for Cassaday and Company’s donor-advised fund, which supports four Washington, D.C. metropolitan area charities and volunteers with So Others May Eat, a non-profit organization that provides food, clothing and healthcare services to the poor and homeless.

“Philanthropy is the love of mankind,” said Jennie Teass Allman ’67, recipient of the Outstanding Philanthropist Award, which recognizes exceptional generosity and civic responsibility demonstrated by significant financial contributions to charitable organizations. “But love is not enough. You have to do something – you have to give back, take action.”