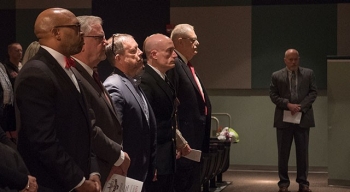 The university’s annual Veterans Day Ceremony, held in the Bonnie Hurlburt Student Center auditorium, featured several student and guest speakers who shared inspirational stories of service and sacrifice. The event was organized by the Military Resource Center, which is directed by Bill Kennan.

“Today is a day of thanksgiving, a day of appreciation,” said Kennan, who served as the master of ceremony. “We have so much to be thankful for, and our military and our veterans are at the center of everything that we value and give thanks for.”

Following the ceremony, Kennan said he was going to call three veterans very special to him: his father, a World War II veteran, and his two sons, who serve in the Army and Marine Corps.

Retired U.S. Marine Corps Lieutenant Colonel veteran, Radford University Vice President for Finance and Administration and Chief Financial Officer (CFO) Richard Alvarez served as one of the event’s keynote speakers. His Marine Corps service included two tours in Vietnam and Southeast Asia, when he flew 255 combat missions in the F-4B Phantom II fighter plane. In his remarks, he recognized the university’s Army Reserve Officer Training Corps (ROTC) staff and students, many of whom performed the ceremony’s Presentation of the Colors.

“These young men and women are the future leaders of the United States Army and we are honored to have them on our campus,” Alvarez said.

He also recognized fellow Marines, as Nov. 10 marked the 242nd birthday of the Marine Corps.

“To my fellow veterans, I want to thank you for your service and recognize the sacrifice of all veterans for their service to this wonderful country. Thank you for wearing the cloth of our nation,” Alvarez said.

Alvarez spent 23 years in the Marines, followed by a 30-year career in higher education. He reflected on his years of service and the values in which they instilled, including work ethic, integrity, teamwork and problem-solving. These same values will guide the newest generation of veterans, he explained.

“Veterans and soon to be veterans, you are a special and valued resource,” he said. “You have skills that are sorely needed, even more so in today’s chaotic global economy.  You have an uncommon ability to communicate with a diverse population - men and women of all educational, political, cultural, religious, economic and ethnic backgrounds.  You know how to listen, too, an important, often underestimated skill in today’s world.”

Alvarez encouraged veterans to be responsible for their actions, to stand strong in their beliefs, to support one another and to never forget those who served before them.

“Honor and take care of each other,” Alvarez said. “We are all, forever, a band of brothers and sisters.”

Del. Nick Rush, a veteran of the U.S. Army, also keynoted the ceremony. Rush was a paratrooper in the 82nd Airborne Division. He proudly represents a long line of veterans, including his grandfather, father, brother, nephew and two sons, who just recently returned safely from deployments in Iraq. 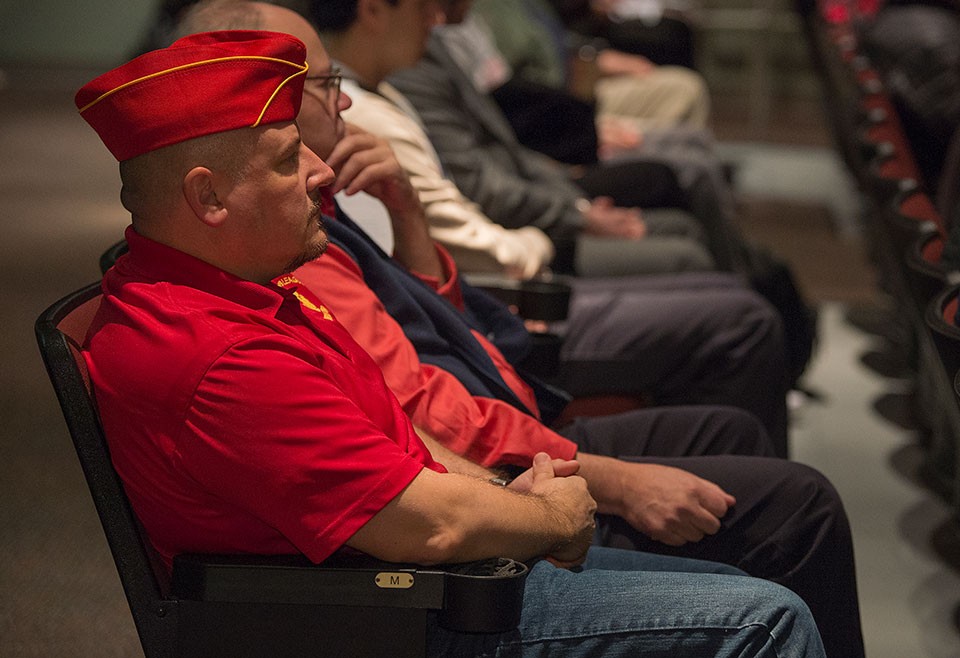 “Veterans we honor today came from all walks of life but share several fundamental qualities, such as courage, pride, determination, selflessness and dedication to duty – all qualities needed to serve a cause greater than one’s self,” Rush said.

Prior to the ceremony, Radford University student and employee veterans gathered in McConnell Library for a breakfast reception. There, junior Will Hardy of New Kent, reflected on his military service. Hardy served in the Air Force as a mechanic, working on the KC-135R, a plane that fuels jets mid-flight. Now a reservist, he said he joined the military about two years ago out of “a sense of curiosity and a sense of duty.”

“It’s life-changing,” Hardy said. “It changes the way you think and see things - your overall attitude. You became more grateful.”

“They do a really good job at preparing you for life after service,” he said. “Here at Radford, the transition has been very smooth. There are great student resources, like the library and Military Resource Center, and all of my professors have been great.”

Radford University senior Robert Pringle is a testament to that point.

Pringle, originally from Florida, served in the Marine Corps from 1981-2001.

“I remember standing in formation and they were retiring me,” Pringle said of his 20 years of service. “It flew by.”

While in the Marines, Pringle worked as an electronics technician and instructor. Upon retiring, he became a licensed vocational teacher at a juvenile correctional school in Natural Bridge, Virginia. When the school closed down around 2005, his wife encouraged him to apply for his veteran benefits.

“They asked me what I was going to do next, and I told them something that I had always thought about my entire military career – going back to school.”

More than 30 years after first joining the military, Pringle did just that. He enrolled at Radford University and is on track to graduate next year with an English degree.

“It’s a dream come true,” Pringle said. “I’ve had a lot of amazing opportunities in my life thanks to the military. There’s not a day that goes by that I’m not proud to be a Marine.”